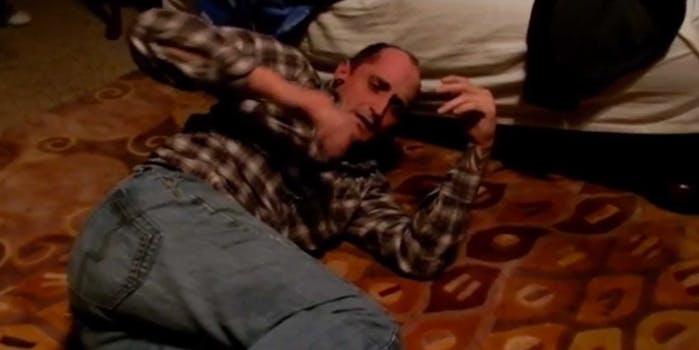 Some things are worse than being caught by Chris Hansen.

In an ugly YouTube video brought to our attention by HyperVocal, a few young men stage a homemade episode of the popular reality series To Catch a Predator, choosing to confront their antagonist a little more… forcefully.

It’s so awful, and the evidence is so thin, this could very easily be a hoax.

The alleged backstory: When the dudes at VillainPros, an independent hip-hop label out of Athens, Ga., heard that an older man was trying to have a beer and “hang out” with a friend’s 13-year-old sister, they didn’t just want revenge—they wanted to send a message. To that end, they recorded their vigilante beatdown and uploaded the violent footage to YouTube as a warning to pedophiles everywhere.

According to the video’s preamble, the suspected predator—who at one point identifies himself as “Robert” while trying to keep his face covered—had been chatting up the teenager on Facebook and thought she was home alone. Upon walking in the front door, however, he takes a hard punch to the face from a guy who then holds him down and appears to confiscate a knife.

The group then continues to pummel and kick him, with short breaks for taunts and some nominal form of interrogation. The man is questioned about his age (28, he says, though they don’t believe him) and told that he’s lucky it wasn’t the cops who caught him, as all the inappropriate chat messages sent to the would-be victim were saved.

For his part, the battered guy curls into the fetal position and hopes for the best: in the VillainPros’ good-cop, bad-cop routine, one member says that he’s preventing another from killing him. Eventually, a “talk” is suggested, and the camera switches off. All we get is a postscript with more unverifiable info—“Robert” is apparently 33 years old and already involved in a sexual relationship with a 14-year-old girl.

Warning: The video is violent and likely NSFW. YouTube has already zapped it as “content designed to harass, bully or threaten,” but naturally, it’s available on WorldStarHipHop, which heeds no such moral standards.

Social media have sparked and complicated pedophilia cases of late. A Facebook hate page, for example, focused the wrath of an entire Swedish town on a learning-disabled man with no arrest record or complaints against him for sexual crimes. In France, a girl was unable to substantiate allegations against her father until she filmed evidence of his abuse with her webcam.

Ultimately, it’s impossible to know the exact circumstances of this particular incident; it seems just as likely that there was a different score to settle, with public-outing-as-sex-offender a particularly malicious punishment. At any rate, the beating seems real enough. “Wonder if he’ll try it again,” reads the text at the end of the video. That’s the nice thing about forgoing street justice and getting someone arrested instead—you don’t need to wonder.