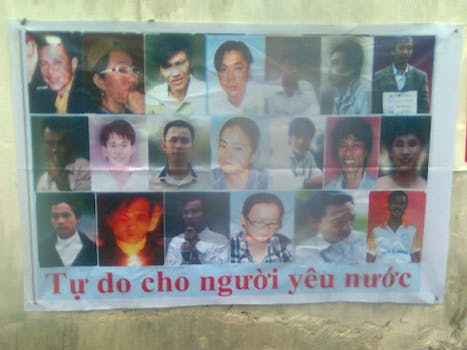 Vietnam’s recent spate of attacking dissidents for their online activity continued Wednesday, as the country convicted 14 citizens of various charges, many of them related to Internet dissent.

It was the largest trial of its kind in the country, according to the Electronic Frontier Foundation, as all 14 were charged with a subsection of “activities aimed at overthrowing the people’s government.” Specific charges included posting anti-government content to their blogs, linking to anti-government material online, and teaching fellow Vietnamese about digital security.

All were linked to Viet Tan, a pro-democracy group based in the U.S. Ostensibly an alternate political party in exile, Viet Tan is viewed by the ruling communist party as a terrorist group, though the U.S. says there’s no evidence Viet Tan advocates violence.

The 14 convicted parties range in age from 24 to 55 and received sentences ranging from three to 13 years in prison, though one, Nguyen Dang Vinh Phuc, received a suspended sentence. Those convicted of blogging covered a variety of topics, ranging from advocating a multi-party system, to covering police corruption, to covering the trials of Vietnamese with HIV. According to Human Rights Watch, “a number of bloggers” attempted to attend the trial in solidarity, but were forcibly removed by police.

One of the convicted bloogers, Dang Xuan Dieu, was defiant. “I have done nothing contrary to my conscience,” he said, according to Human Rights Watch. “So although the authorities may punish me physically and impose a severe sentence upon me, the government is only thereby trampling on the eternal good morals of the Vietnamese nation.”

Wednesday’s convictions came just 12 days after a Vietnamese court refused leniency to two bloggers who refused to plead guilty to attempting to overthrow the state, and maintained their respective 12- and 10-year prison sentences. Their conditions are reportedly deplorable: One is said to have lost his arm in prison.

Viet Tan condemned the conviction. In its official statement, the group announced:

Viet Tan rejects the fabrications peddled by the communist court to rationalize the “subversion” charges. With members inside Vietnam and around the world, Viet Tan aims to establish democracy and reform the country through peaceful means. We believe that gaining an understanding of nonviolent civil resistance, digital security and leadership skills are both empowering and the right of every free individual. In addition, the right to receive and impart information, the right to form an association and right to participate in civic affairs are basic freedoms that no government can restrict.

Photo via Friends of Viet Tan/Facebook