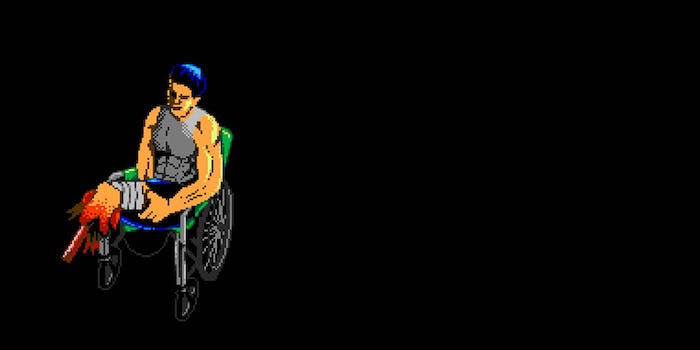 As your marathon runner navigates bomb-filled streets, facts about Boston scroll underneath.

First 4chan made a Doom-inspired video game of LAPD officer turned murderer Chris Dorner’s final moments. Now, for the second time in  two months, another national tragedy has been mocked through a crudely produced video game.

The new pixelated side scroller called Boston Marathon 2013: Terror on the Streets is exactly what its name suggests, a game inspired by the horrific Boston Marathon bombings that claimed the lives of three people and injured more than 260 others on April 15.

The game was produced by CMCW and Smilecythe for shock site lolokaust, which is known for its lewd humor and poor comedic taste when it comes to tragedies like the Sandy Hook Elementary massacre.

In the game you play as a marathon runner who must jump over moving pressure cooker bombs. In the background you can see other injured civilians, bloodied sidewalks, and Boston businesses named “Boston Chowda Inc.” and “MC jackoffs.” As your character runs through the streets, facts about the marathon and about Boston in general (like the New England Patriots losing to the New York Giants in Super Bowl XLII) scroll underneath.

According to a poll on TV personality Greta Van Susteren’s website, 75 percent of people believe these type of games should not be created. This sentiment was also shared by Nina Huntemann, co-editor of Joystick Soldiers: The Politics of Play in Military Video Games.

“It does speak to a minority of Internet culture that seems to have no filter, no moral line that they won’t cross,” Huntemann told Yahoo. “It’s not enjoyable, and it’s not engaging. It will disappear and, hopefully, be forgotten.”

Images from Boston Marathon 2013: Terror on the Streets