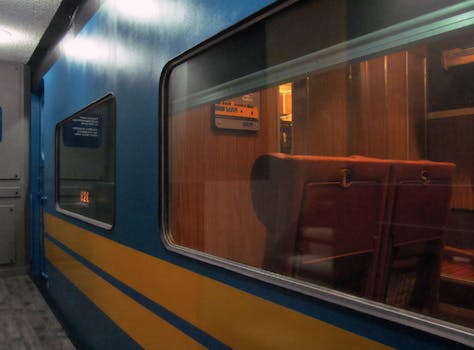 Some people collect model trains. Jason Shron built himself a life-size replica instead.

Some people collect model trains. Others might go out and take pictures of real ones or travel just to ride them. And Jason Shron of Vaughan, Ontario built a life-size replica of one in his basement. VIA Rail coach 5647 to be exact.

Shron’s always dreamed of having his very own train, and he spent nearly five years working on the project. Last week, he posted a video about the train car’s construction on YouTube, where it’s been viewed thousands of times, as well as gain the attention of media north of the border.

It’s safe to say that Shron is the only man in Canada with a full-size train in his basement. He explains on his blog, KingstonSub.com, that riding trains is when he’s most at peace, especially the ones he remembers as a kid in the 1970s and 1980s between Toronto and Montreal.

“Now I have this special place in my house,” he wrote.

The real coach 5647 was built in 1954 for the Canadian National Railway and spent four decades criss-crossing Canada for its original owner, and later VIA Rail, the country’s version of Amtrak. In 1995, the car was retired and sent to Moncton, New Brunswick. That’s where Shron first ran into it in 2010.

Two years earlier, Shron had started constructing a replica VIA passenger car, similar to coach 5647, in a 12 by 20 square-foot room in his basement. Shron said there was a lot of trial and error in the construction and that at times it was hard to find material that matched how the passenger cars looked in the 1970s. For example, he spent months just looking for the right type of ceiling vent. Then in 2010 he found the vents, along with everything else, inside car 5647. Partnering with a friend, he purchased the actual car before it was scrapped and traveled to New Brunswick to salvage as much of the interior he could. Everything from windows and doors to trash cans and seats ended up in his basement in Ontario.

“Getting all of that material and seeing it in my basement—the vents, the seats, the trim—that’s when I realized I could do this,” he said.

Shron finished the project in November 2012, and in early January he posted a short video to his company’s YouTube page (In 2004, Shron started Rapido Trains Inc., which makes high-quality model trains). Initially, he thought only model railroaders and train buffs would be interested in the video—“one nut likes to see another,” as he said—but within seven days the video gained 100,000 views, hundreds of likes, and dozens of comments. He’s also done more than a dozen interviews with newspapers and television stations in Canada.

Shron hopes the video inspires more people to attack that long-forgotten project sitting in the garage, be it an old car or a model railroad.

“I think people see a guy who had a dream and went out and did it and they admire that,” he said. “If this video gives people the inspiration to go out and do that project, then I think that’s great.”

So what’s next for Shron? His next project will be constructing a 12 by 45 square-foot model railroad of Canada’s busiest passenger train station and the surrounding area, something he expects will take 30 years. But that’s not the only goal he is contemplating.

“My dream is for a mention on the Big Bang Theory,” he said.

With a full-sized passenger car in his basement, there’s no doubt, Shron would get along with Sheldon.