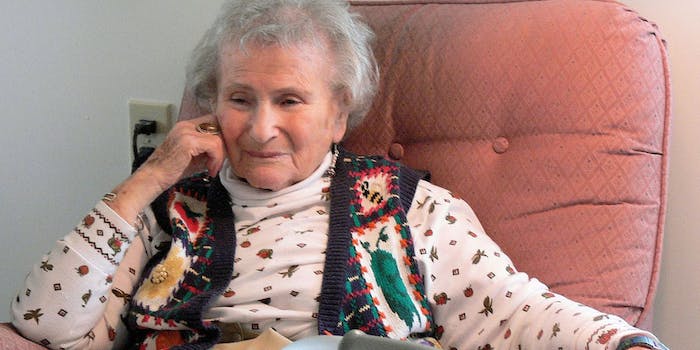 Nevertheless, the Texas granny received a curiously ungrammatical letter from Verizon, which ddeverill scanned and posted to Imgur. Verizon recently received a list of Internet Protocol addresses—the identifying addresses for Internet-connected computers. The users of those addresses, according to a court order, stand accused of downloading a copyrighted movie.

If she doesn’t act within 30 days to address the subpoena, Verizon will be legally obligated to give up her name and address to the company which requested the subpoena. It also suggested that she contact a lawyer or the Electronic Frontier Foundation, an advocacy group for Internet civil liberties.

According to the actual subpoena, which Verizon attached, the company trying to get ddeverill’s grandmother’s name is Bubble Gum Productions.

The subpoena itself was issued by Prenda Law, a Chicago-based firm that’s been heavily criticized as what the EFF calls a “copyright troll”—legal teams that issue subpoenas for large numbers of IP addresses.

According to a similar complaint filed in January, Prenda sought, again on behalf of Bubble Gum Productions, $100,000 in compensation from Florida Internet users who downloaded a video called “ExpTeens” using the file-sharing service BitTorrent.

One problem with using IP addresses to identify potential criminals is that they’re notoriously easy to fake, and difficult to connect with specific people—for example, when wireless networks are left open for others to access.

“I told her to just run around the neighborhood waving the subpoena overhead screaming ‘Who’s the pervert?’” but apparently being on an oxygen machine made this much more difficult than I thought,” ddeverill wrote.

In the past decade, rightsholders have taken similar legal action against grandmothers over sharing unlikely music collections. But the new twist here seems to be the racy material in question.

According to the EFF, “the motivation behind these cases appears to be to leverage the risk of embarrassment associated with pornography to coerce settlement payments.”

When asked if he knew about the subpoena on Reddit, a representative for Prenda Law responded, “Yeah, we’re not going to comment on that.”