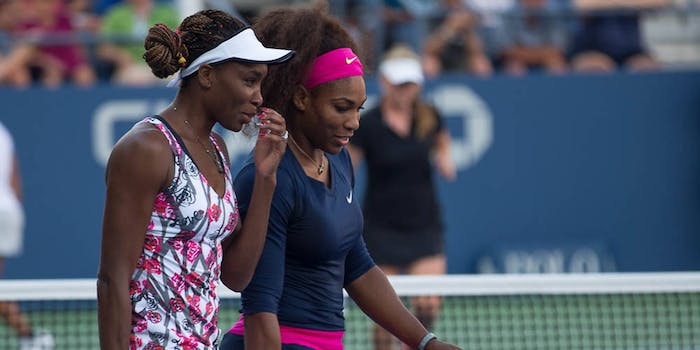 They've beaten the odds—both on and off the court.

Beneath the illuminated perimeter of a packed stadium—one named after an African-American tennis legend—two women played one of the most emotional matchups of their careers Tuesday evening. Their achievements in the sport, as black athletes who defied the odds, already merits their classification as living legends in their own right. Yet as the eyes of a nation watched with intense interest, and as their fingers tweeted every development in real time, one of the sisters stood poised to reach a rare historic feat with a U.S. Open championship this year.

With the attention on Serena Williams’ seemingly inevitable march towards a calendar-year sweep of all four Grand Slam majors, along with potentially breaking the record for the most Grand Slam wins by a woman in the open era, there’s no question about what’s a stake. But on the other side of the net Tuesday evening, Serena saw a familiar face—not only her practice partner from the very moment she picked up a racket, but also a dear friend and perhaps her biggest fan: her sister, Venus.

Together, they’ve journeyed through the ups and downs of careers as professional athletes. Serena battled a life-threatening health scare and Venus an autoimmune condition. Meanwhile, they’ve weathered unrelenting and unfair criticism from the media, sexist insults, and perhaps most visibly of all, the institutional racism of tennis as sport. Regardless of Tuesday night’s result, both sisters’ careers hold an indisputable place in the history books already—serving as a testament to the resilience and vitality of black people. They offer important possibility models when it comes to overcoming institutional barriers to black success.

Although there are now tennis courts in most corners of the country, tennis as an institution has a racialized history as a “country club” sport, a marker of race and class status for well-off white people. But the Williamses, like many others before them, found ways to break into the culture, after some of the most overt obstacles had already been challenged and mostly dismantled.

Although there are now tennis courts in most corners of the country, tennis as an institution has a radicalized history as a “country club” sport, a marker of race and class status for well-off white people.

According to the American Tennis Association, the oldest African-American sports organization in the United States, black people were barred from professional tennis competitions not long after the first lawn tennis court was built in America in 1876—a time when the abolition of slavery had only just begun. The U.S. Lawn Tennis Association, then the governing body of the “whites only” section of the sport, is known today as the United States Tennis Association—which has overseen a bevy of major tournaments spanning multiple decades, including the U.S. Open.

“The USLTA color line was finally broken with prodding from within the association by Alice Marble and Edward Niles and from outside by the ATA,” the website’s history section notes. “Dr. Robert Walter Johnson, Dr. Hubert Eaton and Bertram Baker were among the ATA officials were the key force behind negotiations that in 1950 led to the United States Lawn Tennis Association’s acceptance of Althea Gibson’s application to become the first Black to ever compete in the U.S. National Championship at Forest Hills.”

Gibson went on to become the first person of color to win the first of five Grand Slam titles at the 1956 French Open, followed 12 years later by Arthur Ashe—the namesake of the largest arena on USTA grounds—becoming the first black man to win the U.S. Open.

This history couldn’t have been lost on the Williams family, as the sisters set out on their quest to become tennis greats in the early 1990s. And as they ascended from the juniors to the top of the professional game, both encountered subtle and overt forms of racism.

When Venus was just 14 years old, Emmy-nominated correspondent John McKenzie challenged her in an interview with ABC News Day One about why she was so confident in her gameplay—as if she had any reason not to be.

When questioned about a forthcoming opponent, McKenzie asked Venus if she thought she could win, to which the young prodigy responded, “I know I can beat her.” But that wasn’t enough. McKenzie continued pressing Venus, following up with: “You know? Very confident.” She didn’t deny the faith she had in herself, which led him to push back for the last time: “You say it so easily. Why?” Demonstrating poise under pressure—even though she didn’t necessarily have to—Venus responded, “Because I believe it.”

Her father, Richard Williams, then intervened to protect his daughter, calling out the insidious racial biases at play.

“What she said, she said it with so much confidence the first time, but you keep going on and on,” to which McKenzie protested in vain. The elder Williams continued:

You’ve got to understand that you’re dealing with the image of a 14-year-old child. And this child gonna be out there playing when your old ass and me gonna be in the grave. When she say something, we done told you what’s happening. You’re dealing with a little black kid, and let her be a hid. She done answered it with a lot of confidence, leave that alone.

This racial element here deserves careful attention. As Stacey Patton noted at the Washington Post, data from the U.S. Department of Education and the Journal of Personality and Social Psychology shows that white adults perceive black young people as older than they actually are.

It isn’t as much of a compliment or a statement on their maturity as it is a phenomenon that renders them vulnerable to criminalization and sexualization. And especially within the context of Venus’s interview, it also renders black young people to harsh, age-inappropriate treatment by white adults, some of whom withhold the social graces otherwise afforded to white children.

But that’s just the tip of the iceberg in the long, continuing careers of both sisters.

There’s also the accusations that their father fixed sibling rivalry matches between the sisters during their early career, which came to a head when Venus pulled out of a semifinal matchup against Serena at Indian Wells in 2001. Not only did the crowd boo the entire time, but both Richard and Serena reported hearing racial insults, including the “N-word,” hurled at them the entire time.

Although she went on to win the title, the incident left Serena Williams in tears. She boycotted the tournament until a momentous return earlier this year, announcing her entry in a video published on the Internet—along with the promotion of a racial justice initiative.

When celebrating their gameplay, and cheering their entries into the record books, we shouldn’t only be celebrating athletic feats—but also a triumph against institutional forms of prejudice.

However, they haven’t just dealt with the systemic racism of the sport but also the Other-ization of their bodies, deemed inferior, grotesque, and masculine. Not only did a Russian tennis official call them the “Williams brothers,” the sentiments also become quite clear whenever there’s Twitter chatter during their tournament competitions.

As Jenee Desmond-Harris noted at Vox, every time Serena Williams has won in recent history, with the ascent of social media participation making it a breeding ground for all kinds of unpleasant and ignorant comments, the discussions come with a stark, disgusting air of racism and sexism. Desmond-Harris wrote, “The racism that underlies the characterizations of her as hypersexual, aggressive, and animalistic also means that when she dares to express frustration, she’s stamped with the infamous angry black woman stereotype.”

Yet even with the scourge of racism and sexism both sisters have endured. It was a journey of that began on rundown courts in Compton, California—a far cry from the whites-only, country club environments where American tennis began. And still, despite all that stood in their way, they’ve both managed to become two of the greatest athletes of their generation.

When celebrating their gameplay, and cheering their entries into the record books, we shouldn’t only be celebrating an athletic feat—but also a triumph against many forms of institutional prejudice.