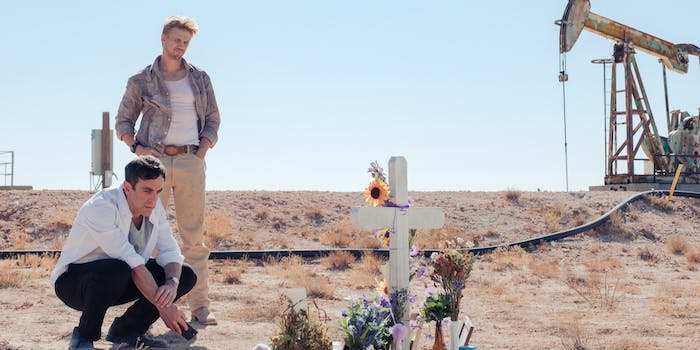 Much has been written about our obsession with true crime podcasts in recent years. We’ve questioned whether the podcasts exploit the victims (and their loved ones) at the center of those shows, why those stories are primarily about white women, and what kind of harm arises when internet detectives go into vigilante mode. We’re far enough into the conversation that there is even an entire TV show (Hulu’s Only Murders in the Building) about a group of true-crime-podcast obsessives who start a true-crime podcast after their neighbor’s sudden death.

Release Date: July 29, 2022
Director: B.J. Novak
Release: Theatrical
A journalist starts making a true-crime podcast about an old hookup whose funeral he’s invited to after her family shares their belief that her accidental death was actually a murder. While the film doesn’t exactly cover new ground, it’s a solid feature directorial debut by B.J. Novak.

Vengeance, the feature directorial debut from B.J. Novak, attempts to wrestle with many of those same themes and questions, some more explicitly than others. Featuring larger-than-life characters and plenty of Texas touchstones—a pivotal scene is set in a Whataburger parking lot—Vengeance wants to be a depiction of the genre and a meta-commentary on it. Even Ben Manalowitz (Novak), a staff writer at the New Yorker who’s attempting to create the next big podcast, offers shades of familiarity. Vengeance doesn’t explore anything we haven’t already heard, but Novak’s sharp script prevents it from feeling completely stale.

After an opening scene that feels like it could’ve been the tail end of a horror movie’s cold open, we cut to Ben and a friend analyzing the ins and outs of the New York dating scene. It’s the kind of pretentious posturing filled with lofty ideas, details of women they’ve hooked up with in the past, including the identifiers they’ve attached to their conquests instead of bothering to learn their last name. Abilene (Lio Tipton) was one of those women, someone so far off Ben’s radar that when her brother Ty (Boyd Holbrook) calls Ben to let him know that Abilene died and to invite him to the funeral, Ben has to scroll through his phone to job his memory of who she even is. Unfortunately, a conversation filled with clever wordplay that sets up the crux of Ben’s dilemma doesn’t help clarify that Ben wasn’t her boyfriend. Soon enough, Ben is off a small west Texas town that’s a good eight hours away from the nearest major city.

After Vengeance’s world premiere at the Tribeca Festival, Novak said he settled on Texas after he “literally looked at a map of the United States and Texas is just staring you in the face.” It’s a kind of draw Novak felt when he went deeper into the smaller Texas towns and is echoed in the script when one character, late in the film, says to Ben, “Texas has a pull, doesn’t it? Gets under your skin.”

The pull is evident by the introduction of Ty and Abilene’s boisterous family, but Ben strikes gold when Ty tells him that Abilene didn’t die from a drug overdose; she was murdered. He offers his form of avenging via the creation of a true-crime podcast. It doesn’t take long to convince the family to get on board, and podcast producer Eloise (Issa Rae) is sold after verifying that it has the “holy grail of podcasts,” aka a dead white girl. In telling a story “about the meaning of vengeance,” the podcast allows Ben to depict a report of a collective delusion, one where people are so unwilling to accept facts that they cling to conspiracies.

Many of the staples you’d recognize on your average true-crime podcast are there. It has the specificity of Texas, which goes far beyond the “y’alls” and “bless your hearts” and an overabundance of gun and college football cultures. Vengeance is filled with a colorful cast of characters, stretching from Abilene and Ty’s family (including Succession’s J. Smith-Cameron) and a local record producer (Ashton Kutcher, splendidly chewing on the scenery in a white pinstripe suit) who worked with Abilene to incompetent police spread across four separate jurisdictions. It features scene after scene of Ben being the exemplary fish-out-of-water whose attempts to fit into this part of Texas make him stand out even more. The further into Vengeance it gets, the more nuance those characters receive from Novak while he makes Ben the butt of most of the jokes.

As mounting evidence suggests Abilene’s death might not be as straightforward as it once seemed, it gets more complicated. Is Ben trying to get to the end for the sake of the story, or because he’s started to care? What is the human cost of commodifying a woman’s life for the sake of the neverending content churn? As it chews those questions, Novak’s script is sharp and highly entertaining as it gives the actors a chance to shine (Kutcher gets a particularly meaty monologue), and it doesn’t relent on aiming at its targets, bar the occasional miss.

And even when every piece of the puzzle is put together or you can figure out where it’s going well before those reveals, Vengeance—like so many of the podcasts it’s emulating—has no easy answers.