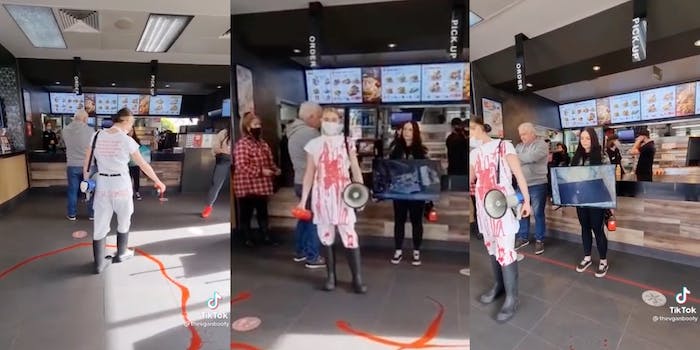 ‘All they’re hurting are the minimum wage workers that have to clean it up’: Viral TikTok shows vegan activist pouring red paint at KFC

Redditors pointed out the human toll.

Video of vegan activists defacing an Australian Kentucky Fried Chicken has people frustrated on behalf of the workers that had to deal with them.

The footage was initially shared by @thevganbooty on TikTok, who captioned her own video “crazy vegan pours blood everywhere in KFC.” It’s unclear why she wrote that, but a grabby caption presumably helps gain a video more attention.

In the first video, which has been viewed over a million times, she walks into KFC covered in what looks like red paint and queues up audio of animals screaming. Once inside, she pours the “blood” all over the floor, and is soon flanked by other activists holding signs and a large TV screen showing animals in cages and getting rounded up for slaughter.

Two subsequent videos show the group simply standing there, continuing to play the sounds as customers try to scoot around them to order. At one point, @thevganbooty starts walking through the red liquid seemingly to track it further throughout the store.

The woman who uploaded the video is Tash Peterson, whose Instagram boldly declares “if you’re not vegan, you’re an animal abuser.” She is not to be confused with popular lifestyle blogger The Vegan Booty based in Mexico.

According to one redditor who works at a supermarket in Perth, Australia, Peterson routinely engages in demonstrations like this in order to subsequently share them on social media.

“I’m rather convinced she just does it for attention whoring,” they wrote. “Unfortunately, the media decided to report on her shenanigans…further fueling her attention-seeking antics. She hops from store to store doing the exact same thing.”

While Peterson’s Instagram boasts photos and videos from numerous disruptive protests across Australia, including carting around corpses and body parts of dead animals in stores, and receives scores of supportive comments from fellow vegans, redditors were quick to call attention to the human toll these stunts take.

“All they’re hurting are the minimum wage workers that have to clean it up,” wrote u/EpicestGamer101.

One teen who claims to work at McDonald’s added that “watching this video hurts me more than it really should have because I’ve had to deal with cleaning up messes of these proportions.”

But others didn’t expect the activists to care about that sort of thing at all.

“A large swath of these people literally hold animal lives in higher regard than human and you expect them to give a fuck about workers?” asked u/Robert999220.

“I would imagine this kind of protest is more about changing consumers’ minds,” another Redditor rationalized. “Though the protesters seem to outnumber customers several times to one here, so it’s more just general social media clout chasing/virtue signaling.”