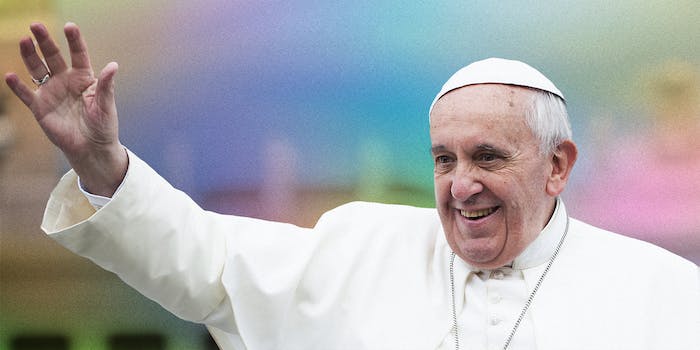 Some say the Catholic Church is in no position to speak on sexual immorality.

Today, the Vatican announced that priests won’t be allowed to bless same-sex marriages on the grounds that God “cannot bless sin.”

After receiving a query about potentially performing blessings for same-sex marriage, the Congregation for the Doctrine of the Faith released a formal response shutting it down completely.

While it reaffirmed the current Vatican position that LGTBQ+ individuals are welcome within the Catholic community, it fell back on the old “love the sinner hate the sin” reasoning:

This has come as a surprise to some due to Pope Francis’ apparent support for gay marriage. However, while the pope does support civil unions for couples of the same sex or gender, that support ends outside of the church doors. Though he sees LGTBQ+ people as children of God, deserving of civil rights, respect, and a safe family life, he stops short of condoning their relationships on a spiritual level, on the grounds that it runs counter to God’s plan for human relationships.

“Homosexual people have the right to be in a family. They are children of God. You can’t kick someone out of a family, nor make their life miserable for this. What we have to have is a civil union law; that way they are legally covered.”

The decree has angered a lot of people, who see it as perpetuation of the church’s long history of homophobia.

And to some, it’s yet another example of the intense hypocrisy of an institution plagued by historic and ongoing sexual abuse scandals to speak on the sexual morality of consensual relationships between adults.

The decree may further divisions in the German wing of the Catholic Church, who are currently debating on the matter of blessing same-sex unions. Many people suspect that the decree is in direct response to progressive Bishops within the German church who are planning to raise the issue of blessing same-sex unions, and those between previously divorced persons, at their upcoming synod. While they do currently want to maintain a distinction between heterosexual marriages with non-divorced persons and all other relationships, even this appears to be going too far for the Vatican.

Bishop Georg Bätzing, head of the German bishop’s conference, has said that while they will be considering the decree, it won’t be the only factor in their decisions. Bätzing, who is in favor of decentralizing much of the decision-making on doctrinal matters within the church, stressed that the church needs to evolve and change to meet the needs of contemporary Catholics and the society they live in.

Meanwhile, people are already looking for ways to circumvent the rules. Sister Simone Campbell of the Network Lobby for Catholic Social Justice expressed relief that the Vatican’s statement “wasn’t worse,” before going on to suggest that just because priests couldn’t bless “the contract” didn’t mean they couldn’t bless both parties separately in a ritual “where the individuals get blessed to be their committed selves.”