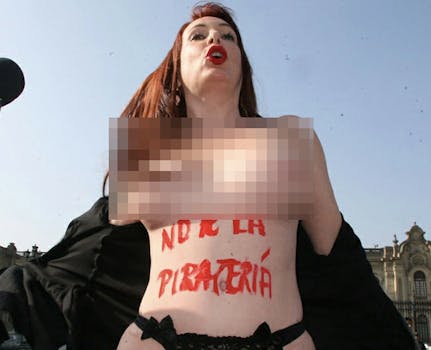 People who think online copyright laws go too far have a long history of public stunts—already in July, protesters in New York dressed up like pirates to sing copyrighted songs at a lawsuit-happy songwriting society. But one Brazilian woman has finally made a spectacle for the other side.

Vanessa de Oliveira, author of such books as 100 Secrets of a Call Girl and He Cheated on You? His Problem! arrived in Lima, Peru’s Plaza de Armas via limousine on Thursday afternoon. She promptly dropped her trench coat, revealing a topless chest and the words “no to piracy” written in red on her stomach and back.

“I’m doing this for my book,” she said, according to the Peruvian newspaper El Comercio and translated with Google,“[so that it] is not pirated anywhere.”

“A country is made ​​with culture, with books,” she added. “When people pirate books, it is because the culture is in danger.”

Police quickly rushed to the scene and demanded she cover up.

But on her personal blog, Oliveira defended the act, noting that her books are pirated particularly frequently in Peru.

“Some people will find it crazy, others will condemn, some say that a lone protest accomplishes nothing,” she wrote.

“My dream to be a great author is going away,” she said. “Going to the police was a joke.”

“So I decided to take a more radical approach,” she said.