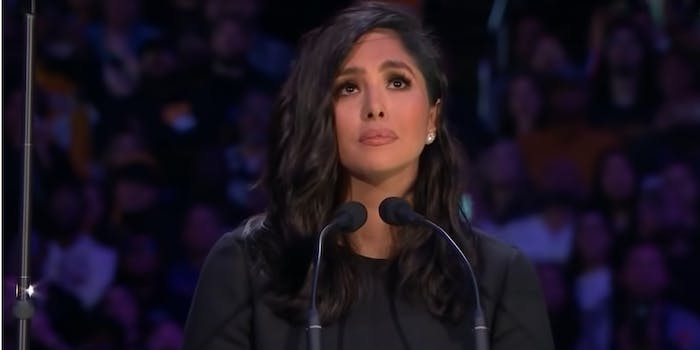 One deputy allegedly showed the photos to a woman at a bar.

Vanessa Bryant has filed a lawsuit against the L.A. County Sheriff’s Department over photos taken after the helicopter crash that killed Kobe Bryant, daughter Gianna, and seven others.

According to TMZ, the lawsuit alleges that at the Jan. 26 crash site, at least eight deputies “pulled out their personal cell phones and snapped photos of the dead children, parents, and coaches.” Those photos were then allegedly circulated within the sheriff’s department, and the lawsuit claims that a sheriff’s deputy showed the photos to a woman at a bar, which was reported in February.

Bryant filed the lawsuit in part because she is afraid the photos will leak, “and she lives in fear that she or her children will one day confront horrific images of their loved ones online.” But the suit also alleges that L.A. County Sheriff Alex Villanueva attempted a coverup, telling any deputies that had photos on their phone to delete them and avoid any formal discipline.

Bryant also published a statement regarding a Univision interview her mother, Sofia Laine, recently gave, alleging that after the death of Kobe and Gianna, her daughter cut her off financially: “My husband and daughter passed away unexpectedly, and yet my mother had the audacity to do a television interview speaking negatively of me while shedding tears for a car and a house that were not in her name.”