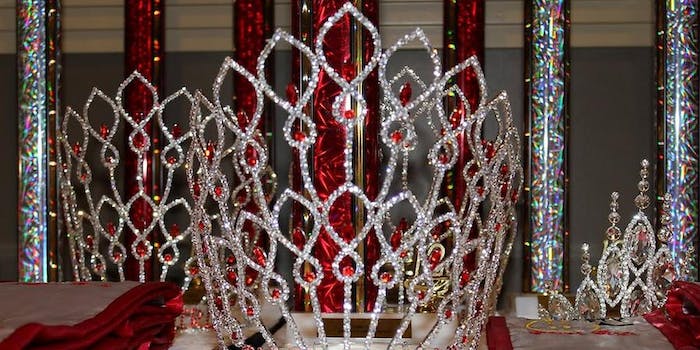 This article contains sexually explicit material that is NSFW.

As a keen admirer of the human vagina in its endless variations, I’d like nothing more than to see the organ properly celebrated. That is to say: Contrary to some advice you may have heard from Judd Apatow movies, it’s a great idea to put the pussy on a pedestal.

So I guess I have to give Brian Sloan, the visionary behind the blowjob-simulating sex toy the Autoblow 2, some credit for trying. Even if the details of the inaugural World’s Most Beautiful Vagina Contest are a bit skeevy, his heart (and dick?) is in the right place.

According to a press release for the contest, competitors can win up to $5,000, simply by digitally photographing their vulvas while awkwardly holding a printed-out hashtag in the frame and uploading this image to the Internet for strange men to judge and vote on. Cool.

Oh, right, I almost forgot about the part where the winners are flown out to Los Angeles to have their genitals 3D-scanned to create new snatch-style ports for Sloan’s Autoblow device. You didn’t think this was all just about female self-esteem, did you? No beauty pageant ever has been.

“Most companies use ‘stock’ vaginas and re-brand them with new identities multiple times with new packaging. If you lined up all of the vagina toys available today, you’d find 75 percent of the vaginas to be strikingly similar.” (Which we gather hasn’t exactly been a problem for consumers, but OK.)

The point is, Sloan wants to give men a say in the aesthetics of their masturbatory aides—even if it’s ultimately a superficial distinction. He admits that what he’s really doing is scanning vulvas and slapping them on top of the standard Autoblow “sleeve” in place of that weird rubberized mouth, “but ‘vulva’ doesn’t have the same ring to it as ‘vagina.’” Agree to disagree, dude!

“I didn’t want to go through the time and expense of 3D scanning the kinds of vaginas I liked and then finding out that most guys preferred other types,” he said. “I prefer the exploded hamburger type heavy on the meat flaps, but I know a lot of other guys prefer the moose knuckle style. [Cool story, bro!]. I’m just interested as a businessman in giving men exactly what they want. So a contest is, as far as I know, the only way to do that.”

“I prefer the exploded hamburger type heavy on the meat flaps, but I know a lot of other guys prefer the moose knuckle style.”

Sloan went so far as to promise accurate skin tone in the finished products: “It’s important for our customers to feel that they are actually inserting themselves into the vaginas that won the contest.” Owners of vaginas of all shapes and sizes are encouraged to apply, with the exception of those who prefer to go au naturel, as the machine “can’t 3D-scan hair.” Riiiiiiight.

And the entries—link incredibly NSFW—are trickling in. Currently, 38-year-old Coralyn Jewel of California has the lead, with a 7.2 rating, and a 6.5 is all it takes to secure third place.