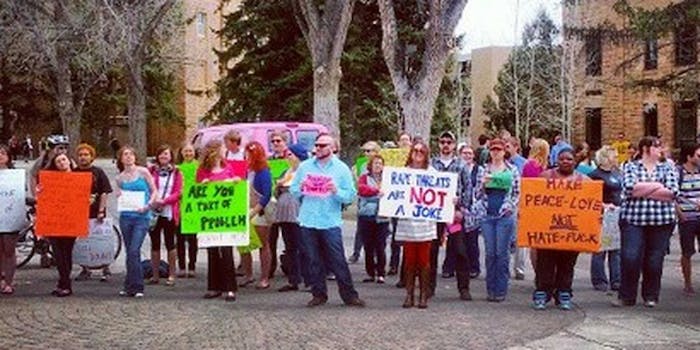 College student charged with posting rape threat against herself

"I want to hatef*ck Meg Lanker Simons so hard," read the Facebook message on the University of Wyoming's "UW Crushes."

A student at the University of Wyoming is accused of interfering with a police investigation after allegedly sending a rape threat to herself.

Campus police have evidence that a post appearing on the Facebook page UW Crushes, in which the anonymous poster wrote about wanting to “hatefuck Meg Lanker Simons (sic) so bad,” was actually posted by Lanker-Simons herself. While the post has been removed from Facebook, it was screencapped and shared on Imgur. 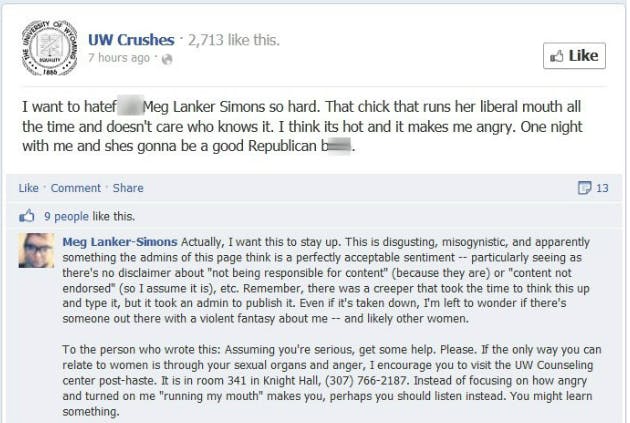 Lanker-Simons responded to the post, saying it should remain live to be made and example of. Her husband also appeared to respond, according to the Daily Caller.

The post sparked an on-campus protest against rape culture, at which Lanker-Simons was a speaker and called out the anonymous poster. One organizer of the protest claimed the rally was fighting “the way rape culture becomes fostered among students.”

The university said Lanker-Simons received a citation due to alleged false statements she made to its police department. University police determined the post was made using her computer while it was in her possession.

Lanker-Simons was also the plaintiff in an unrelated 2010 lawsuit against the university. School officials tried to block activist Bill Ayers from appearing on campus. A federal judge said the university could not stop Ayers from speaking.

Lanker-Simons is scheduled to appear in Albany County Circuit Court later this month. Her attorney said she will plead not guilty, according to local paper Laramie Boomerang, and she asserted the same on her Tumblr account. If found guilty of the misdemeanor charge, Lanker-Simons faces up to a year in prison and a fine of up to $1,000.

At first, the university offered assistance to Lanker-Simons and condemned the Facebook post. “No student should have to deal with such threatening language,” it said in a statement. While that tone changed slightly following the investigation, the school said the incident should not detract from its goal of making everyone on campus feel safe.

“This episode has sparked an important discussion reaffirming that the UW community has no tolerance for sexual violence or violence of any type. The fact that the Facebook post apparently was a fabrication does not change the necessity for continued vigilance in assuring that we have a campus where everyone feels safe,” UW spokesman Chad Baldwin said. “It’s important that this event does not undermine the progress that has been made in this area.”

The school will surely be keeping a close eye on the replacement page for UW Crushes, snappily titled UW Crushes 2.0.