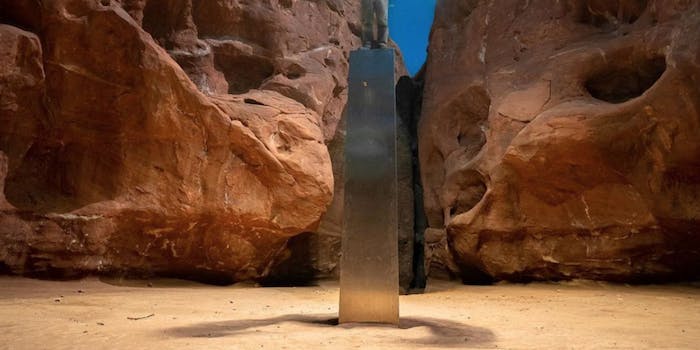 It still remains unclear who put the structure in the desert to begin with.

A mysterious monolith that captured the internet’s attention in November was removed not by aliens, as many online had hoped, but by four men.

Discovered in a desert in Utah on Nov.18, the strange metallic structure spurred widespread theories on how it came to be in the rugged landscape.

The object even led to a joint-investigation between the Bureau of Land Management (BLM) and the San Juan County Sheriff’s Office.

But just as quickly as it was discovered, the sculpture disappeared only 10 days later. Four men, however, happened to be on the scene when the object was removed.

Ross Bernards, a 34-year-old Colorado native, traveled six hours to see the monolith in person on Nov. 27. Detailing the experience in a post on Instagram, Bernards said he witnessed four other men arrive while he and his friends were taking pictures.

“4 guys rounded the corner and 2 of them walked forward. They gave a couple of pushes on the monolith and one of them said ‘You better have got your pictures,'” Bernards writes. “He then gave it a big push, and it went over, leaning to one side. He yelled back to his other friends that they didn’t need the tools.”

Bernards adds that one of the men went on to state “this is why you don’t leave trash in the desert” before pushing the monolith over. While dismantling the sculpture, one of the men reportedly turned to Bernards and also said “leave no trace.”

A friend of Bernards, 38-year-old Michael James Newlands, told the New York Times that none of his friends interfered with the other men’s work.

“It must have been 10 or 15 minutes at most for them to knock over the monolith and pull it out,” Newlands said. “We didn’t know who they were, and we were not going to do anything to stop them. They just came in there to execute and they were like, ‘This is our mission.’”

Another alleged friend of Bernards also published a video on TikTok about what supposedly went down.

A man named Andy L. Lewis, known for performing high-altitude stunts, ultimately took credit for removing the sculpture on Tuesday after posting video of the dismantling on Facebook.

Sylvan Christensen, another man who took part in the removal, told the Times that he had aided in the mission in an effort to protect the Utah desert.

“There are clear precedents for how we share and standardize the use of our public lands, natural wildlife, native plants, fresh water sources, and human impacts upon them,” Christensen said. “People arrived by car, by bus, by van, helicopter, planes, trains, motorcycles and E-bikes.”

While the men have taken credit for taking the monolith away, they are not claiming to have placed it there in the first place. Despite rumors online, no solid leads have been found linking the object to its creator.

Either way, the sculpture has garnered massive amounts of attention online from a pandemic-weary public. Videos using the hashtag #monolith on TikTok have racked up 33.5 million views in total.