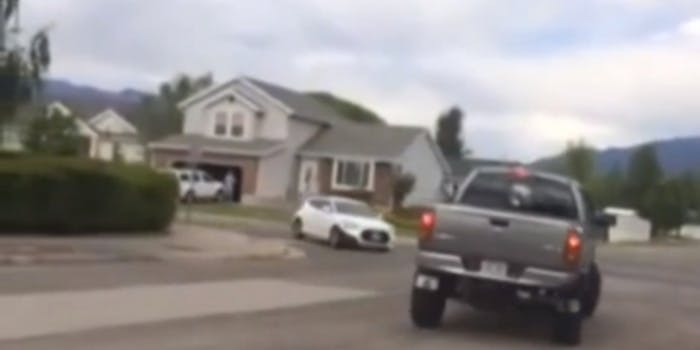 Dukes of Hazzard-style justice still exists. Over the weekend, one teenager got a taste of it.

On Saturday afternoon, a car was reported stolen by a man in Duchesne County, Utah, reportedly by his 14-year-old grandson, who possibly had a weapon. Police tracked the vehicle in Syracuse and gave chase. The driver plowed through residential areas and parks where children were playing.

When the chase entered a neighborhood where kids were skateboarding and biking, Bryson Rowley decided to take matters into his own hands. In this video, sirens can be heard as kids run out of the way. Then a grey Dodge Ram screeches into frame.

Officer Erin Behm of the Syracuse Police Department told Fox 13, “The person driving the truck could see it was turning back into the park, and he did not want the car to hit all of the children, or any of the children, and he actually pulled his truck in the way so the car collided with the truck.”

Rowley did not want to appear on camera.

More footage of the stolen car driving through a park can be seen here. The 14-year-old was taken to a juvenile detention center.

I wonder if Dodge Rams are seeing an uptick in sales after this.