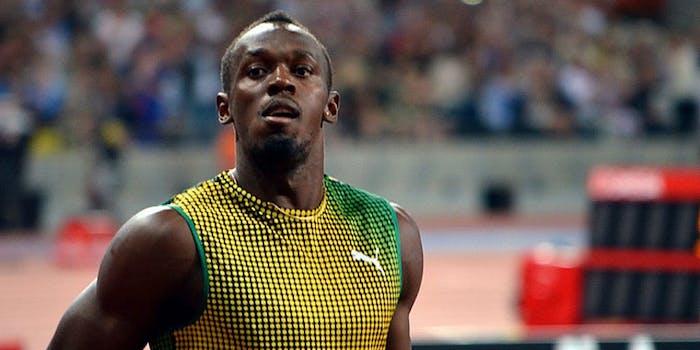 Cameraman on Segway runs over Usain Bolt after victory

'Mamma mia,' said the announcer. And he was right.

Usain Bolt is the best sprinter in the world, and he proved it again at the world championships Thursday, easily winning the 200 meters gold medal, four days after triumphing in the 100 meters.

But after the race, while walking a victory lap, a cameraman riding a segway lost control of his vehicle and blindsided Bolt from behind.

Only a few minutes earlier, Bolt had laid waste to the rest of the field, including American Justin Gatlin—who was thought to have the best hope of anybody of beating Bolt. But Gatlin lost by .01 second in the 100 and then lost by substantially more Thursday.

“He took me out,” Bolt said afterward, via the New York Times. “The rumor I’m trying to start right now is that Justin Gatlin paid him off.”

Responded Gatlin: “I want my money back. He didn’t complete the job.”