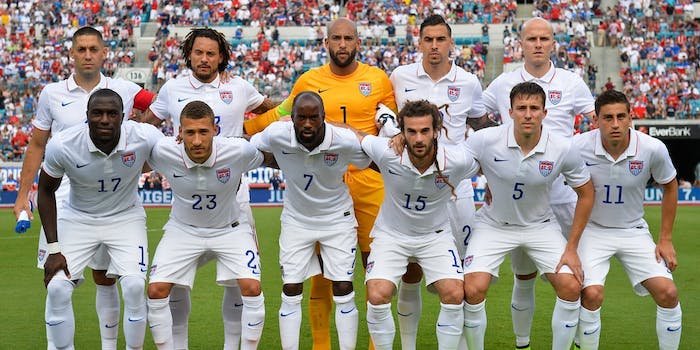 23 reasons you should be excited about the USMNT

From a get-out-of-work-free card to Ann Coulter, here's why everyone should be a soccer fan for the next two hours.

The United States meets Germany in a massive match Thursday with an opportunity to survive Group G and move onto the final 16 in the World Cup. It’s a wonderful collective moment stateside—Olympic-level in terms of earnest patriotism but with a more cohesive focus than gymnastics. Two hours is all you need. You should be properly jacked.

America has some late-breaking good news, too. Two big-name Ghana players—Kevin-Prince Boateng and Sulley Muntari—have been kicked off the team for fighting. Portugal can bail us out against Ghana even if we falter against the Germans, and this helps the cause. This isn’t an occasion to think like that.

This is America, after all—a nation that gave the world unintentionally hilarious Bush-era patriotism, insufferably ironic millennial patriotism, listicles, Dr. Scholl’s Inserts, bird feeders, heating pads, and the most awesome blossoms. We’re a nation that incubated Michael Jackson’s talents and Eddie Van Halen’s fingers—then we put them together on “Beat It” and the world exploded.

In honor of our fightin’ 23 on the frontlines in Recife, here are 23 reasons you should be excited about Team USA’s moment of valor.

1) For the first time in USMNT history, most reasonable American offices will be halting productivity and waving the red, white, and blue.

The world does this every World Cup. Here are some Mexican surgeons not performing surgery. It’s a beautiful collective break. And if you needed more incentive, Dr. Jurgen Klinsmann wrote you a letter to your boss.

Need note to get out of work Thurs? @J_Klinsmann has you covered. Show your cool boss. It will def work! #LetsDoThis pic.twitter.com/i2oCZmGAGZ

Down in Austin, Texas, area sports bar The Haymaker was paid a visit Sunday during the Portugal game by the fire marshal. The telecast set records for men’s soccer. A minor league baseball team in Oklahoma held a viewing party that turned out 5,000-strong.

This isn’t about metropolitan travelers in D.C. or Boston in faux-British pubs. We care, and do so with questions, affection, and an emerging sense of individuality.

Talking tactics, the USMNT is basically the Joe Flacco-Ray Lewis Baltimore Ravens of 2012. The team runs on role players, plays its game no matter the score, and tries stuff out of necessity. See: Jermaine Jones’ right foot. Point is, we don’t have the personnel to play defensively, behind the ball, and aim for a draw against Germany.

That’s a recipe for a death blow. In fact, Germany and the USA enjoy a 10th all-time meeting today, Germany is 6-3 in the series, and there has never been a draw.

Joachim Löw coached with Klinsmann and the pair share a distinct bromance. Now they must destroy what they hold most dear. YES.

Jones, John Brooks, Fabian Johnson, Julian Green, Timmy Chandler—we got a bunch of them and that should be a point of pride. Germany is, after all, one of the two or three most talented soccer countries on earth. It’s like Texas with quarterbacks. It helps that the guys are charismatic prospects with bright futures. Who doesn’t want to karaoke “Quit Playin’ Games With My Heart” with this quintet?

The clubhouse leaders—our big three—are proven at the highest levels of European soccer and feared. These dudes are an iron backbone. Howard led the English Premier League in saves for Everton last season.

Bradley was called “Lex Luther” and “The General” by the Italian Seria A faithful.

Dempsey became a fan favorite at Fulham for busting moves like these.

14) A world-beating, signature win is on the table

Again, I don’t see a draw as a realistic result. The USMNT is the special sauce that makes the “Group of Death” moniker so appropriate for Group G because the world would rather not deal with this spirited, talented, expertise-laden club. A win today and the world is on indefinite notice going forward.

North America made a strong case for more automatic berths in the World Cup with its resolute effort. Costa Rica and Mexico are in the round of 16, and now its first-place team can plant its flag.

Deride flopping in soccer all you like, turns out the USMNT does it almost as much as anyone at the World Cup. Good. It’s a flop-centric landscape and there’s nothing wrong with flailing, writhing, and covering your eyes in faux-pain. I do it every time my wife asks me to take out the garbage.

Coulter is a poisonous tree frog and an opportunist. She dislikes soccer and makes tired jokes about its supposed liberalism. She’s great at covering blanket statements in sexism.

More evidence soccer is for girls. Player from Uraguay caught BITING an opponent yesterday. Not punching. Not a cross-body block. BITING!

And also reaching for asinine assertions.

Anti-soccer evidence pours in! Smug creep at IRS, John Koskinen, served as President of the U.S. Soccer Foundation from 2004-2008.

Anyway, Coulter doesn’t like soccer and that’s a bingo.

This matters a great deal, actually. The English national team is loaded with talent but is perpetually buried by its cancerous press—one that dries up goodwill and turns the team into the Kardashians. It trickles into the national sentiment and all hope is lost when the skies turn gray. The English are basically the Dallas Cowboys. There’s so much criticism that it becomes impossible to think around the negativity and very rarely are there moments of competitive joy, despite the brand.

By contrast, after a devastating draw to Portugal, Americans reacted like this.

20) That time the Nuggets beat the Sonics

As exemplified by the #LetsDoThis call to arms.

From the #USMNT locker room in #Recife. Thanks for message @GoretiSantos1. Kickoff 2 hrs away. #LetsDoThis #USA pic.twitter.com/WhGsMPeNt5

22) We get to revisit a classic

Don’t blame me, I voted for Whitmore.

. . . Or “I made a Spotify playlist to get you excited” and it features the best version of the Star-Spangled banner of all time. I’m talking, of course, about Marvin Gaye at the 1983 All-Star Game. You can tell if someone is a jerk by whether or not they deride this version’s lack of traditionalist leanings.

Bigger picture: Our national anthem is an old drinking song made whole by its poetry. The melody doesn’t matter, the message does. The USMNT is the tired and the hungry. The guys that get buried on the depth chart in Europe. The military brats searching for an identity. The 30-plus journeyman that lost most of their careers to injury. The white guy with dreadlocks without a 311 concert to call home. The Hispanic dude with Mexican parents who feels awkward in a Team USA polo.

Photo via US Soccer