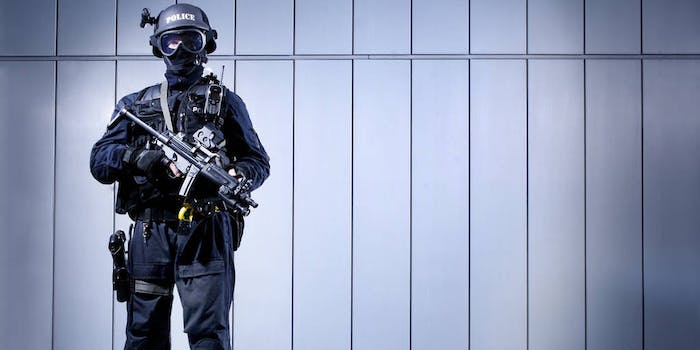 Instead of being a powerful tool for organization, technology may be turning into our greatest enemy.

Travel to most U.S. cities, and you’ll encounter a police force significantly different from that you might have seen a few decades ago.

Historically, the friendly neighborhood police officer was focused on living the police motto: “to serve and protect,” looking out for the interests of the community and its residents. While even this depiction of policing was a myth (police officers have been beating, murdering, and interfering with members of marginalized communities for as long as policing has been around), it’s faded into the new face of law enforcement, which is highly militarized.

As the military and its contractors decommission armored tanks, ammunition, weapons, and more, these items are making their way onto police forces across the U.S., many of which include veterans who attended the police academy after being discharged.

That’s causing a huge—and important—shift in police culture, and one that citizens should be paying attention to. When the arm of the law is backed up by military equipment like armored tanks and machine guns, that radically changes the landscape—sometimes over the outcry of residents like those of Concord, N.H. The towns’s citizens protested militarizing the municipal police force with signs that read: “When did Salinas become a battlefield?” and “Thanks, But No Tanks.”

U.S. police departments started utilizing such equipment as part of the failed “war on drugs,” arguing that it was too unsafe to patrol without such gear, but today, it’s being radically overused and abused—if it was ever appropriate to use at all. SWAT teams go out on routine raids, for example, that could easily be handled by regular police officers. Military gear is often used to intimidate civilians, not to increase officer safety on a call.

And that’s not where the shift in attitudes and equipment ends.

Police forces are also becoming highly reliant on military technology, not just equipment. Police departments across the U.S., for example, are using drones for law enforcement purposes. They’re also taking advantage of advanced surveillance tools and other technologies developed specifically for war zones, claiming that these improve the ability to enforce the law—as, for example, when Bay Area Rapid Transit (BART) police jammed cellphones on trains to prevent a protest.

As military tech trickles down into public use, warrantless wiretapping, facial recognition, and other electronic surveillance (including exploitation of social media) are becoming a routine part of the law enforcement toolbox in the United States. Many civilians are not aware of the extent to which they are being observed by law enforcement agencies—especially as numerous phone and Internet providers don’t offer information on their agency policies when it comes to police requests for customer records.

This begs the question: Are the police waging electronic warfare on the civilians they’re sworn to protect?

Recent months have seen an explosion of scandals over the abuse of electronic surveillance by the NSA, painting a chilling picture of a “security culture” where the civil rights of citizens—and foreign leaders, as Angela Merkel can tell you—aren’t secure at all. The reasonable expectation of privacy supposedly guaranteed under the Fourth Amendment has been systemically eroded, with police forces playing a vital role in the process.

Why would domestic law enforcement agencies need to use electronic surveillance techniques and other military technology in order to spy on U.S. citizens? Police forces claim that these tools provide them with more options for pursuing cases, investigating leads, and gathering evidence for prosecutions, as for example when unwise criminals post incriminating evidence on Facebook. However, evidence from the NSA scandal as well as filings against local police departments shows that such surveillance is also being used to track activists and politically involved individuals, a finding with sinister implications.

At one time, the military was used extremely cautiously and judiciously on U.S. soil. The National Guard and Reserves were called out primarily for national disasters, to provide aid and assistance, in addition to being deployed overseas to assist the regular military, and very rarely to provide policing (though the Guard was originally founded to put down strikes and protests). The military isn’t a police force—nor is the police force a military, with these distinctions being an important part of the social shifts that took place in the formative years of the U.S.

However, these lines are blurring in a post September 11th landscape, where police are working with military gear, using military training and techniques—functioning, in effect, as micro-militaries.

Is domestic spying about legitimate concerns such as terrorism and gathering evidence to prosecute murderers and rapists? Or is it about keeping tabs on those with opposing political views? This would hardly be a new development, but in the new technology landscape, much more advanced and invasive spying tactics are available, including GPS tracking, the use of CCTV and facial recognition, monitoring of cell phone and landline activity, ISP records, and more.

While we conceptualize technology as a great liberator, police forces view it very differently; one might say that many are simply leaving us with enough rope to hang ourselves.

Instead of being a powerful tool for organization, technology may be turning into our greatest enemy, as activists continually find themselves having to develop workarounds for law enforcement interference (as for example in Iran, where activists had to outsmart law enforcement). Even as the U.S. government criticizes nations like Iran and Egypt for suppressing electronic freedoms, its police forces are doing just that to its own citizens.