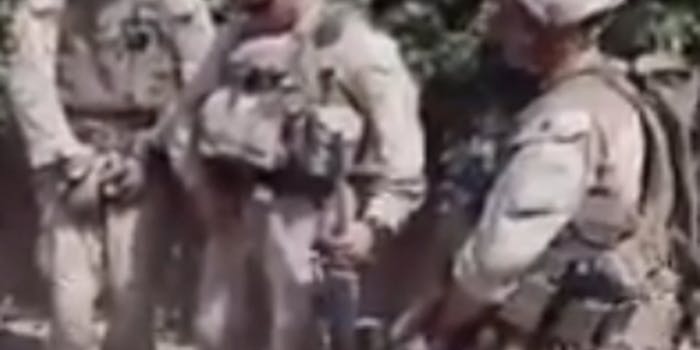 Staff Sgt. Edward W. Deptola has been charged with "desecrating on bodily remains" after a YouTube video showed him urinating on the corpses of Taliban fighters.

A United States Marine is set to face court martial today after a YouTube video informed his superiors that he’d urinated on the bodies of dead Taliban fighters in Afghanistan and then posed for photos with the corpses.

Staff Sgt. Edward W. Deptola has been accused of desecrating on bodily remains and posing for unofficial photographs with human casualties. Along with those charges come accusations that Deptola failed to properly supervise junior Marines and report the misconduct.

Deptola and three other Marines were initially charged last year after the video surfaced within military camps. The Marines had just returned to North Carolina’s Camp Lejuene after a combat tour and, as CBS News’ David Martin reported, “apparently started showing the video around as a war trophy.”

The Marines were wearing full combat gear during the July 2011 episode. At one point, one of the Marines looked down at the bodies and quipped, “Have a good day, buddy.”

The video’s eventual publicity landed the four Marines in hot water. Staff Sgt. Joseph W. Chamblin was charged and pleaded guilty to similar charges last month. He was sentenced to 30 days confined and received a reduction in rank and a hefty fine. Three other Marines were given administrative punishments for their roles in the matter.

The original video has long since been deleted from YouTube, but a number of mirror clips exist, one of which has accrued more than 750,000 views.