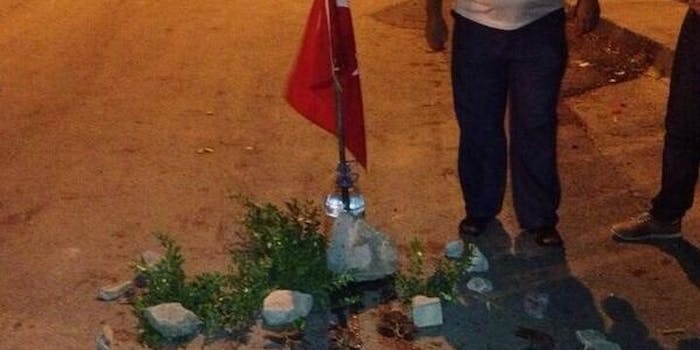 Before he was shot in the head, Abdullah Comert "left an impassioned trail of images and words across Facebook and Twitter."

Abdullah Comert is now the second confirmed casualty of the uprising in Turkey. The 22-year-old was pronounced dead last night from wounds to the head sustained by “unidentified gunmen,” but eyewitness accounts are placing the blame on police, whose brutal tactics have been well-documented by protesters.

At least one other protester is confirmed dead, a half-dozen more are suspected to have been killed, and an estimated thousand more have been injured.

But Comert left an impassioned trail of images and words across Facebook and Twitter that are, respectively, inspiring his peers to keep up the fight and spurring further outrage—he might have become the movement’s first martyr overnight.

This image of Comert after the assault (warning, it’s graphic) was taken by Vasily Zaytsev, who was on the scene at the time—he tweeted that Comert was killed by an “aggressive savage dog cop.”

And this gut-wrenching video, which purports to show Comert’s family and friends reacting to his death pronouncement at a state hospital, surfaced not long after the news broke. It is harrowing.

But it’s this message he left on Facebook that is getting shared widely and is being touted as an emblem for the uprising.

Translated from the Turkish, it reads:

I slept 5 hours in 3 days. I have been exposed to tear gas countless times and had 3 near death experiences. They say, “Give up, you can’t save the country”. I say, “Yes, we will and we’ll die if we have to”. (I’m so exhausted, in 3 days I drank 7 energy drink and 9 painkiller pills. I have a hoarse voice but I will be in the square at 6, just in time for revolution)”