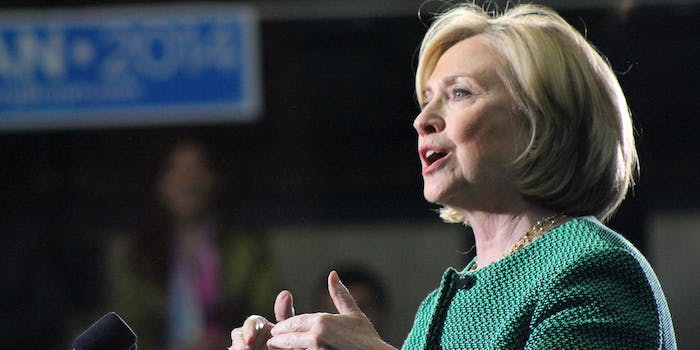 There's no such thing as free labor.

Although Hillary Clinton has proposed a series of programs for reducing youth unemployment, she has also come under fire on the Internet for staffing her presidential campaign with unpaid interns. In response, Clinton announced on Tuesday that she was hiring 20 paid staffers in Iowa (the first state to hold a presidential primary or caucus next year). But, as Joanna Rothkopf of Jezebel noted, “the new hires don’t do anything to interrupt the trend of forcing even high-ranking staffers to work as unpaid ‘volunteers’ before being officially hired.”

Can @HillaryClinton pay people to attend her speeches but not pay her interns?
YES SHE CAN!!!
-mao#ReadyForHillary #IncomeInequality #FAIL

While it’s valid to criticize Clinton for professing concern about youth unemployment while refusing to pay many of the young people who work for her, there is a deeper problem at play here—namely, the fact that unpaid internships have become an all-too-common way of economically exploiting young people.

“Prior to the 1990s, formal internships were rare. They functioned as apprenticeships in credentialed professional programs such as health care or accounting,” explained economist Neil Howe in a Forbes editorial last year. “But starting with late-wave Xers, this formality began to fade. College credit started to replace pay as more high-prestige companies offered unpaid positions, which continued to attract plenty of well-qualified applicants willing to compete for free.”

Because millennials have been taught that unpaid internships will help them build their resumes and develop valuable professional connections, they continue to seek them out—often without realizing that, as the National Association of Colleges and Employers reported in 2013, only 37 percent of college graduates with experience as unpaid interns received at least one job offer as a result. This is only marginally higher than the success rate of graduates who never interned (35 percent) and significantly lower than that for those who held paid internships (63 percent).

However, thanks to the problem of high youth unemployment (the latest data from the Department of Labor places the number at more than 12 percent), an increasing number of ambitious college graduates are left with no choice but to work for free if they want to get their foot in the door within their chosen fields. “No one keeps statistics on the number of college graduates taking unpaid internships, but there is widespread agreement that the number has significantly increased,” reported the New York Times in 2012.

By last year, the practice had become so widespread that the same newspaper described it as the creation of a “permanent intern underclass: educated members of the millennial generation who are locked out of the traditional career ladder and are having to settle for two, three and sometimes more internships after graduating college, all with no end in sight.”

College graduates aren’t the only ones victimized by this institution. “Unpaid internships contribute to recessions as well as are triggered by them,” writes Dr. Nicolas Pologeorgis—an expert in business, economics, and finance—in Investopedia.

Along with misleading hopeful millennials into thinking they can obtain full-time work, Dr. Pologeorgis notes that “an increased supply of free labor tends to displace full-time workers and increase unemployment,” as well as “close off opportunities for minority applicants or people coming from disadvantaged backgrounds since high-quality and prestigious internships tend to favor the students/interns who come from affluent or relatively wealthy families and can afford to work for free.”

Technically unpaid internships that exist outside of the nonprofit sector and aren’t being used for college credit are only legal if they meet six criteria established by the Department of Labor, including that the internship must be “similar to training which would be given in an educational environment,” that the interns not “displace regular employees,” and that the employer “derives no immediate advantages from the activities of the intern.”

Unfortunately, some of the criteria contradict each other, in spirit if not precisely literally; for example, even though one stipulation requires unpaid internships to be “for the benefit of the intern,” another states that the intern isn’t “entitled to a job at the conclusion of the internship,” a detail that is frequently downplayed by employers as it would remove one of the main incentives that drives unpaid internships in the first place.

Even worse, although the Economist noted that “most unpaid internships in the private sector in America look decidedly iffy” when it comes to both the aforementioned labor regulations and minimum wage laws, it has been notoriously difficult to actually hold the employers accountable in court, despite more than 30 cases being filed on behalf of unpaid interns in the past four years.

If there is any silver lining to all this, it’s the fact that more attention is being paid to the unfairness of the existing system.

Indeed, one particularly prominent case made Internet headlines last week: In Glatt v. Fox Searchlight, two unpaid interns who worked on the movie Black Swan from 2009 to 2010 sued to be compensated for labor that included “copying documents, maintaining takeout menus, assembling furniture, taking out trash and, in one case, procuring a nonallergenic pillow for the movie’s director, Darren Aronofsky.”

Although a Federal District Court ruled in 2013 that the working conditions did not meet federal standards and the plaintiffs should have thus been classified as employees, the United States Court of Appeals for the Second Circuit reversed that decision. They argued that companies had the right to disregard the Department of Labor’s guidelines if it can be determined that the intern rather than the employer “is the primary beneficiary of the relationship” (even though an intern can be viewed as the primary beneficiary by simple virtue of having gained “experience”).

Since the opinion by Judge John R. Walker, Jr. also argued that courts should be flexible when “[examining] the economic reality as it exists between the intern and the employer,” employers have basically been given a carte blanche to pick which federal guidelines they choose to follow when using unpaid interns, then rely on appeals courts to bail them out if they lose an earlier legal case when accused of labor exploitation.

If there is any silver lining to all this, it’s the fact that more attention is being paid to the unfairness of the existing system. Celebrities like Charlie Rose and Lena Dunham have already been taken to task on Twitter for their use of unpaid labor (the former settled for $250,000 and the latter voluntarily agreed to start paying her performers). Although Clinton is still using plenty of unpaid interns for her campaign, her decision to pay 20 of her Iowa staffers reveals that she is at least aware of the controversy surrounding this issue.

That said, at a time when publications like the Washington Post have started referring to millennials as “the lost generation” because of their bad luck in inheriting a post-Great Recession job market, these paltry steps forward simply aren’t enough. If we want America to be a land of opportunity in practice as well as theory, we need to do away with unpaid internships altogether.