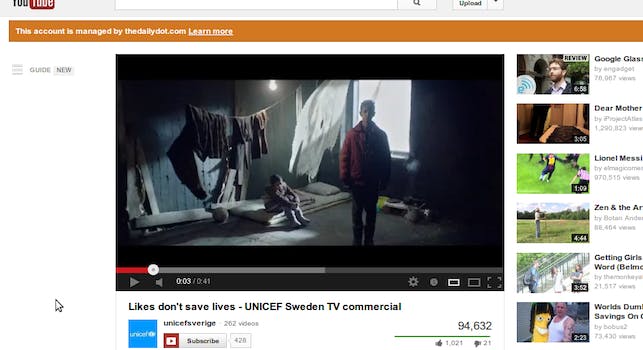 UNICEF says it needs your money, not Facebook likes

A year after the Internet failed to capture Joseph Kony, UNICEF has a message: Give us money, not likes.

It’s been about a year since just about everyone in the developed world attempted to take down Ugandan warlord Joseph Kony by watching a YouTube video. A lot of likes and retweets and upvotes were dished out that day, but nothing really happened—Kony is still roaming through the jungles of Central Africa, kidnapping and murdering as he sees fit. Perhaps inspired by this most well-publicized failure, UNICEF Sweden is embarking on a tough new ad campaign that calls out Web activism for what it is: symbolic posturing.

Called “Likes Don’t Save Lives,” the campaign of YouTube videos and ad posters is a darkly humorous dig at UNICEF Sweden’s own Facebook fans and followers.

“Sometimes I worry that I will get sick, like my mom got sick,” says a child in one of the videos. “But I think everything will be alright. Today, UNICEF Sweden has 177,000 likes on Facebook. Maybe by the summer we’ll get alright.”

“We like likes, and social media could be a good first step to get involved, but it cannot stop there,”  UNICEF Sweden’s Petra Hallebrant told The Atlantic. “Likes don’t save children’s lives. We need money to buy vaccines for instance.”

Harvard professor Zeynep Tufecki has suggested that people who drive online campaigns like Kony 2012 were never prime candidates for real-world activism in the first place. In other words, it’s a symbolic gesture that doesn’t hurt anyone, but also doesn’t really help.

Check out the other videos, produced by Stockholm ad agency Forsman & Bodenfors, below.