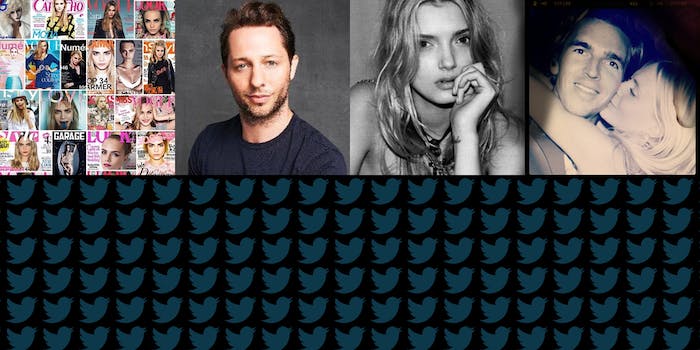 Looking for people to unfollow on Twitter? Start here.

Cara Delevingne is the biggest model in the world. She also apparently doesn’t care about PR and doesn’t walk straight, which is great. But it turns out that her friends, other than Michelle Rodriguez, are just a bunch of non-quiche do-nothingers: a nightmare entourage, as can be seen in this humble private jet pic:

This would be a good time to ditch Cara (1.59M followers minus 1) from your following list. Here’s another tweet that can help the argument:

He used to call himself “man about town” and wrote the book Classy: Exceptional Advice for the Extremely Modern Lady. He would occasionally tweet these kind of insights: “Go to mrblasberg.com for more snaps from Coachella!” that are better read with a “don’t'”attached: “Don’t go to mrblasberg.com for snaps from Coachella,” excluding the exclamation mark.

This dude was angry at me once already for unfollowing him:

She’s the lady in the private jet picture with an unseen outfit, just body. Her TBTs (Throwback Thursdays) are awful, stuff like her and Freja Beha being photographed by Emma Summerton for British Vogue’s August 2008 issue. She always third-person subretweets. As a whole, she only tweets once a month because, like many rich kids, she has Instagram to relay her visual thoughts and can’t even remember how to use Twitter. The perks of being a vexatious débutante.

Mr. Cook is the last piece of this flaccid jigsaw puzzle of Cara Delevingne’s unironically wealthy social circle. He’s the fiancée of Delevingne’s sister. As the Daily Mail notes: “Poppy Delevingne will have two ceremonies – one in London and one in Marrakech – when she weds James Cook, who works for his family’s aerospace firm.” Cook is the ridiculously uninteresting lad in the jet who got the seat that faces backwards. He too doesn’t bother tweeting, and his Instagram is full of Poppy Delevingne sleeping or waving him off. On a good day he’ll steal an image of himself and post it with the Getty logo. He is himself a human watermark.