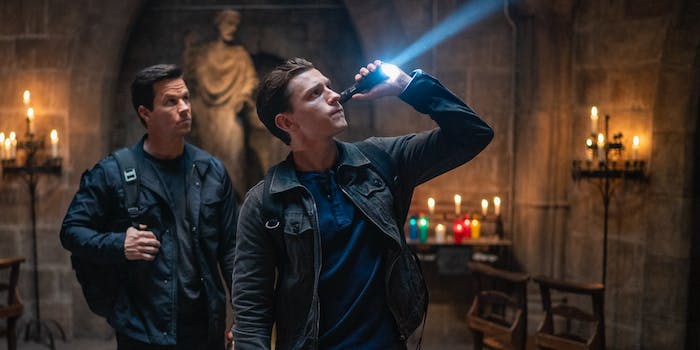 Tom Holland and Mark Wahlberg star in a film more than a decade in the making.

The Uncharted video game series, which was developed by Naughty Dog, follows a treasure hunter named Nathan Drake as he ventures around the world looking for various hidden treasures. An attempt to bring Uncharted onto the big screen has been an effort more than 10 years in the making that involved a half-dozen directors, various actors being circled for rules, and a pandemic causing a major delay in filming.

Against all odds, the Uncharted movie does actually exist, and there’s even footage with a young Nathan Drake (Tom Holland) and his mentor Victor Sullivan (Mark Wahlberg) front and center; Antonio Banderas, Sophia Taylor Ali, and Tati Gabrielle round out the cast.

It is undeniably a movie. But is it enough to satisfy both casual viewers and the people who’ve been waiting more than a decade for Uncharted?

Like any major adaptation of existing intellectual property, there’s an additional level of nitpicking. For instance, is Holland too young to play Nathan Drake? Does Wahlberg do a disservice to Sully by not donning the mustache? And that doesn’t even touch Wahlberg’s history of hate crimes, which, for some viewers, is enough of a deterrent.

If Holland thought taking on Uncharted would help distance him from his most famous role, he may be facing an uphill battle—especially after several people pointed out the similarity in the stance that Spider-Man holds with Captain America’s shield in Civil War versus Nathan Drake trying to stay put in an open plane.

Another big issue for some fans is that even though Uncharted hasn’t been adapted into a major film yet, they’ve already got their own Nathan Drake in the form of Nathan Fillion, who once campaigned to get the part and even starred in a 2018 fan film directed by Allan Ungar.

After the trailer debuted online, Fillion’s name trended on Twitter as people pointed to him as the better choice for the role.

Even without the baggage of the casting or years of expectations building up the Uncharted movie, if you’re unfamiliar with the video game franchise, you might not even know that Uncharted is based on a video game—something that could work for or against the film. It’s not completely unapproachable for someone who’s never played the games before, but on the other hand, there doesn’t seem to be much distinguishing Uncharted from several other big-budget action movies including Netflix’s Red Notice, which dropped its first trailer soon after Uncharted.