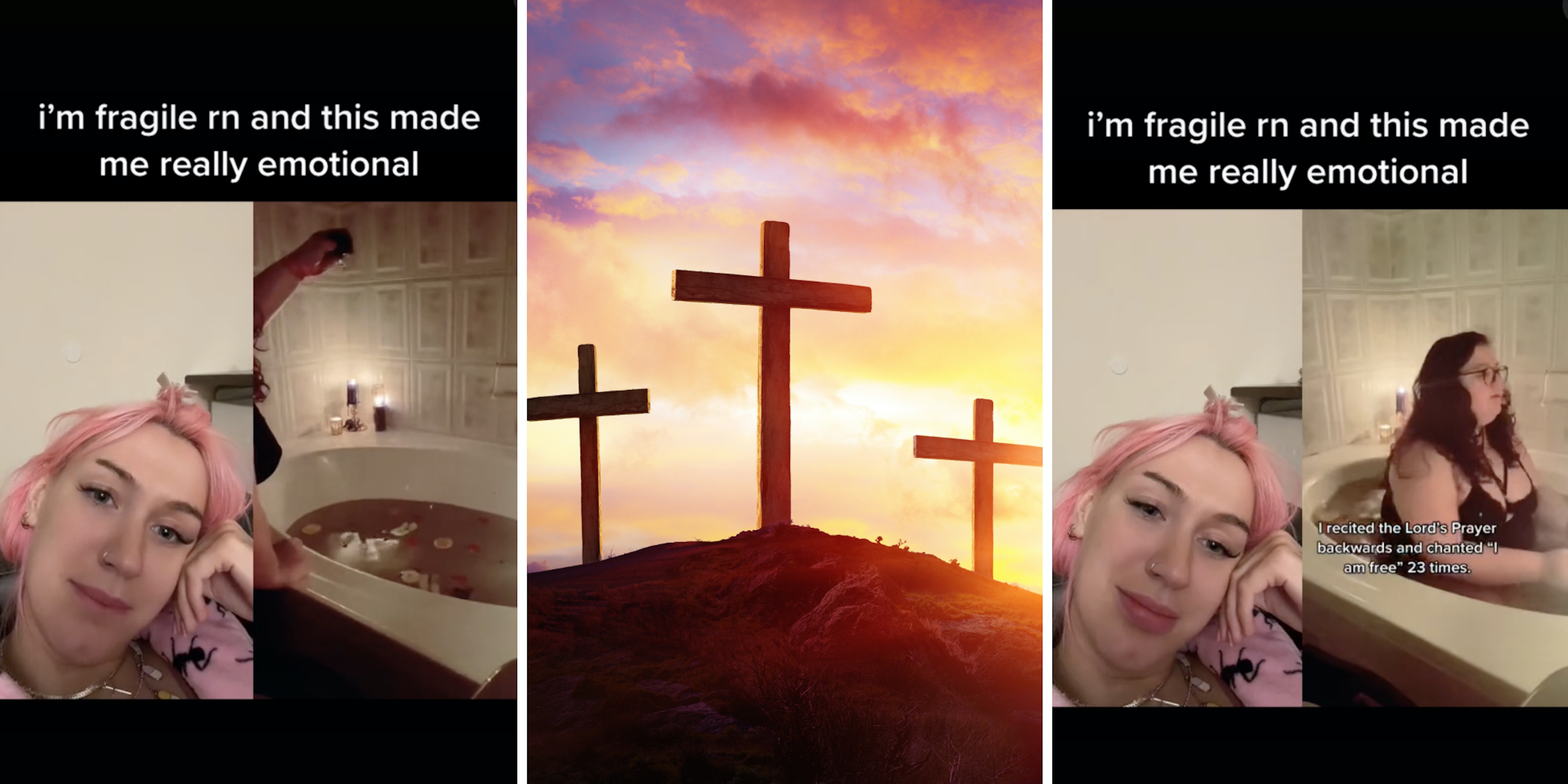 ‘The religious trauma is so deep’: Former Christian shows ‘unbaptism’ ritual on TikTok

'One person is helping people break free from their faith chains!'

There’s been a sharp decline in religiousness in the United States over several generations, with fewer and fewer people attending regular church services. In fact, studies indicate that 2021 marked the first year ever that American church membership dropped “below majority” numbers. The most dominant religion in the world is Christianity with a whopping 2.382 billion followers globally.

While it’s reported there are over 45,000 different Christian denominations globally, the religion appears to be dominated by two general sects: Catholics (50.1%) and Protestants (36.7%). While each sect has its own belief system, and then there are sub-divisions and sub sects apart of these belief systems, many of the rites, traditions, and practices across these sects are similar. A common, but not universal, practice among many Christian denominations, are baptisms.

According to Christianity.com: “If the meaning of baptism could be summarized to one word, that word would be identification. Baptism speaks primarily of personal, public identification with Jesus Christ.” This ceremony can be interpreted as a public declaration of one’s faith and there are some who argue that depending on which sect of Christianity you subscribe to, you cannot be considered an “official” member of a congregation without a baptism.

Which could be why there are people “undoing” their baptisms in ceremonies, some of which are uploaded online, like this one showcased in a viral TikTok that was originally posted by @redbirdmoon.co and later featured by Australian pop singer Peach PRC (@peachprc) in a duet on the popular video sharing platform.

In @redbirmoon.co’s video she can be seen preparing a bathtub and sipping from a cup that looks like it is filled with wine. Text overlays pop up throughout the fast-forwarded video, one reads: “Anti communion of apple and wine.”

“I recited the Lord’s Prayer backwards and chanted ‘I am free’ 23 times,” the TikToker wrote. “I declared all ties to the Christian god and The church to be broken and banished.”

@redbirdmoon.co then dunks herself into the bath water and emerges, smiling as a text overlay reads: “I did it!”

There were some users who thought the idea to “unbaptize” herself was a brilliant move.

“I never thought to unbaptize myself, this is genius,” one viewer said.

“One person is helping people break free from their faith chains ! This is simply inspiring,” another wrote.

“I was abused traumatized and used and then baptized into the Amish Church,” a third shared. “I ran so far and so fast from all of that. I’m going to un baptize myself.”

“This is such an absolutely amazing idea I hope you don’t mind that I am going to do one of these tomorrow for myself!” another user claimed.

Others referred to how much they identified with the song that the TikTok was set to, Peach PRC’s “God is a Freak.”

“I went to catholic school for 10 years. It broke me. My experience taught my mom a lot too. This song helps me with my religious trauma,” one viewer wrote.

Some of the lyrics from the song read:

“God is a bit of a freak / Like, what’s the fixation / On hating the way he creates? / So why would I spend my eternity / With God when he’s a freak? / Why’s he watching me getting railed on the couch / Staying pure for a wedding? / He’s got fucked up priorities.”

Others called the video “empowering” and said that they identified with the relief the woman in the unbaptizing video apparently felt after performing her self-ritual.

There were some, however, who expressed confusion at the @redbirdmoon.co’s ritual. “If she’s not religious anymore why would a ritual mater to her? I’m just confused with the work she’s doing? Lol,” one viewer commented.

Another user said that they were so brainwashed by religious trauma that their knee-jerk reaction to seeing the clip was to immediately ask for the woman’s forgiveness even though they aren’t religious themselves anymore.

“The religious trauma is so deep that for a split second I asked God not to punish her for this,” they wrote.

And then there were TikTokers who said that they themselves were religious and expressed their sadness for others who had such negative experiences in their own congregations.

“As I Christian woman I want to apologize on behalf of others, to anyone who has ever felt anything other than love, understanding & grace, I am so Sorry,” one user said. “It breaks my heart knowing that because you’ve encountered broken people struggling in their their own walk of faith, they have ultimately Tarnished your journey. I am so sorry & I love you all and wish you everything that is good.”

User @redbirdmoon.co (who goes by Vix) set her original viral video to “friends only” on TikTok after it began making the rounds online, according to a follow-up video.

The Daily Dot has reached out to both Peach PRC and Vix on TikTok for comment.