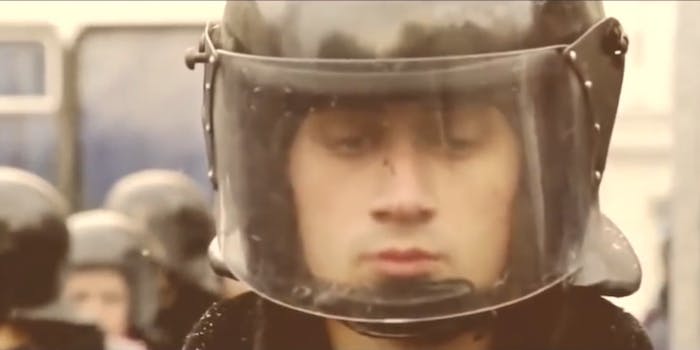 This Ukraine footage is more powerful than a Hollywood blockbuster

"Please, do not misunderstand me, danger is real. But fear is your choice.”

There has been no shortage of breathtaking photos and powerful voices to emerge from the chaos in Ukraine, where protesters have clashed with authorities for months over closer integration to the European Union. It only seems only fitting that a short but beautiful YouTube clip would be the medium to celebrate and do justice to the struggle.

The two-minute clip was created by Alexander Makedonskiy, a young Ukrainian filmmaker who’s uploaded numerous videos focusing on Euromaidan—the term (which translates to “Eurosquare”) used for the wave of demonstrations in Ukraine—for months.

“In reality, fear does not exist,” the speaker says. “Fear lives in one corner of our mind, in our thoughts of the future. Fear is a fruit of our imagination. It makes us afraid of things that are not real and will, most likely, never be real. It’s pure madness. Please, do not misunderstand me; danger is real. But fear is your choice.”

The quote is adapted from After Earth, Will Smith’s 2013 blockbuster flop. Somehow, Hollywood’s normally cheesy writing has a whole lot more weight when it’s the soundtrack to protesting Ukrainians risking everything to take Kiev.