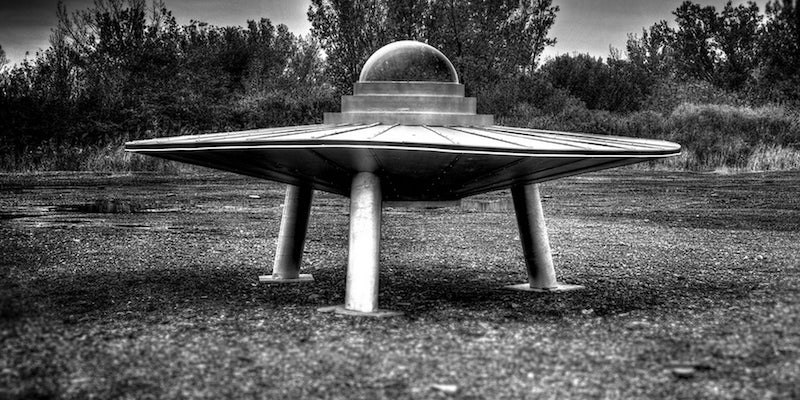 How British spies are ruining the Internet

On the Internet, everyone could be a spy working for the British government.

Conspiracy theorists hold an interesting place in political discourse. On one hand, it’s easy enough to push them aside as basement-dwelling wackos pointing their Dorito-stained fingers at blurry photos of WTC 7 or “The Umbrella Man.” On the other hand, if you had said just a year ago that the U.S. government was conducting mass surveillance of all online activities—with the full cooperation of companies like Facebook and Verizon—you likely would have been grouped with such paranoia-driven sludge.

But what if intelligence agencies the world over are hoping you’d think this way?

According to more leaks from former National Security Agency contractor Edward Snowden, that is precisely what the U.K. spy agency Government Communication Headquarters (GCHQ) has made common practice. In slides given to Snowden trustee Glenn Greenwald, the Joint Threat Research Intelligence Group (JTRIG) has been trained in psychological, sociological, and even biological methods of destroying the online reputations of “targets,” a broad term that includes terrorists, foreign spy agencies, private corporations, and perhaps most concerning, the vaguely labeled “hacktivists.”

As Greenwald put it himself, the goals of JTRIG are “to inject all sorts of false material onto the internet in order to destroy the reputation of its targets—and to use social sciences and other techniques to manipulate online discourse and activism to generate outcomes it considers desirable.”

While tactics offered in the program to accomplish these goals range from writing fake blog posts about the target to creating “honey traps” (wherein a person is lured into a compromising sexual situation), the weirdest details may come in the form of three shoddy pictures of flying saucers.

Contained in a presentation labeled “The Art of Deception: Training For A New Generation Of Online Covert Operations,” the photos look exactly like the types of flying saucers we’ve seen in grainy photographs and shaky camera angles since the 1950s. But what are they doing in a top secret training material for British spies?

As renowned Ufologist Nigel Watson told Yahoo News, the photos are likely not evidence of alien visitors and more likely a part of training agents to use the reputation of UFO believers to their advantage.

“Government agencies are still aware of the power of the belief in UFOs, and that they are willing to use the Internet to exploit these beliefs,”  Watson says. “Such deception can be used as a means of covering-up more mundane terrestrial activities (like the testing of secret aircraft or military exercises) or to undermine the credibility of ufologists.”

This practice—known as “agent provocateurs”—is not new and not specific to the U.K. In the 1960s, as part of its infamous COINTELPRO program, the FBI would regularly infiltrate an array of groups to disseminate damaging and false information, doing so to groups as varied as the Ku Klux Klan, Black Panthers, and anti-war protesters on college campuses. A popular conspiracy theory even claims famed New World Order alarmist Alex Jones is a CIA agent assigned with the task of making conspiracy theorists appear crazy.

The largest conspiracy forum on the Internet, the Reddit hub r/conspiracy, has quickly become obsessed with the JTRIG revelations. Having long suspected government agents in their ranks, loyalists to the forum we’re gifted the actions of moderator BipolarBear0, who removed the Greenwald story no less than six times from the more mainstream subreddit r/news. In a haze of confirmation bias, it even appears to some that BipolarBear0 is one of these infiltrators—especially after he/she submitted anti-Semitic materials to r/conspiracy to test the board’s supposed racist ideologies.

While BipolarBear0 is most likely not a government agent and just a diligent mod, the slides show irrefutable evidence that if spy agencies haven’t distributed fake materials, they are at least training their agents to do so.

It’s a hard hit for an era of the Internet that is already rife with obfuscation, hoaxes, and outright lies. Late night host Jimmy Kimmell has made headlines twice by engineering fake viral videos, one of a twerk session gone wrong and another of a wolf wandering the halls of a Sochi hotel. Last month, popular Twitter feeds such as @HistoryInPics and @HistoryInPix were duly lashed by historians for spreading misinformation and doctored photos, including one of the Giza Pyramids falsely covered in snow.

Even those of us raised with the Internet are failing to approach what we see online with the appropriate skepticism, and now government agents are legitimately being trained to fool us.

What programs like JTRIG either don’t know or don’t respect is the legitimacy of online discourse. Even in these conspiracy forums, meaningful discussion relies on faith in the person with whom you’re communicating. The Internet as a community is crowded enough with distorted rumors—and just plain ignorance—without Orwellian government agencies (or past-their-prime comedians) mixing in their own false leads.

While the Internet serves many purposes, it is still a place to learn first. It’s where we go to learn about Lorde, pork chop recipes, and, yes, UFOs. Discerning what makes a source trustworthy is hard enough, and being led astray by false stories doesn’t just hurt GCHQ’s targets: It hurts the Internet itself.