Flying to Vegas? Look to your left. Now look to your right. Statistically speaking, one of you is about to get ripped off by a cabbie. And it’ll probably be you, the imbecile who chose the middle seat and paid $15 for plane wifi.

Taxi scams are nothing new, but here’s something novel: The Nevada state government is out-innovating Uber in attacking these scofflaws.

How the “Sin City Shuffle” works

There are two main routes to get from the Vegas airport to the Strip. One of them is illegal. To figure out which one you’re on, apply this test: Look outside. If you can’t find outside, you’re in a tunnel—which means you’re being ripped off.

The I-215 tunnel adds about $10 to your fare, but one in three cabbies “longhauled” undercover cops through it anyway. The country hasn’t seen this kind of brazenness since Bankerty Robberson opened a Skimask Hut outside Wells Fargo in 1979.

What can possibly be done about such a confounding crime? I had plenty of time to research this on a recent trip to Vegas, while my own cabbie, Mickey, drove me to the Bellagio by way of Montpelier, Vermont.

Uber’s absurd answer to longhauling is straight from your childhood: When a driver behaves badly, he only gets one star. Within hours, Uber adjusts your fare. Their systems can do this automatically because they have everything they need to calculate an “ideal” fare—start point, end point, traffic conditions, and past fares. If the driver keeps scamming others, he automatically gets fired.

But Nevada officials found fault in Uber’s stars. In fact, they kicked the company out of town for not protecting tourists.

I stand with Nevada and say—leave this to the pros.

Plan A: People with guns

In June 2012, Nevada launched its first major broadside against longhauling in the form of a roadside checkpoint. Uniformed cops stopped occupied cabs at random and offered to prosecute drivers who were taking inefficient routes.

Unfortunately, through no fault of the state, it didn’t work. It turns out that uber lazy tourists were too apathetic to show up in Clark County District Court during their Vegas vacation:

The authority’s chief investigator, Ruben Aquino, said only about three passengers chose to press complaints out of the 80 cabs that were stopped on Thursday.

‘People were not willing to prosecute over a couple of dollars,’ he said. ‘They just wanted to get to their hotels.’

So, while Mickey gave me a tour of Mount Rushmore, I researched Nevada’s next attempt.

The Nevada Taxicab Authority constructed BAPS throughout McCarran International Airport. Each sign lays out state law and enumerates the proper taxi fares for every conceivable trip a tourist might take, using approximately twice as many words as it took Ronald Reagan to tear down the Berlin Wall.

I knew that Uber was coded largely in Python and Objective-C, so I was curious to see which technologies the Authority selected for the BAPS program.

After extensive research, I can report that the signs are big sheets of paper glued to foam.

Now: How much time would it take you to hang foam boards? Five years? Ten? Well, that’s why you’re a middle-seat guy. The Nevada Taxicab Authority implemented the BAPS program airport-wide in just two years.

And they would have done it even quicker, except that, as Nevada Taxicab Authority Administrator Charles Harvey explained, “We had to haggle with the taxi industry on what the signs should say.”

Understandable. It’s like when Erin Brockovich discovered PG&E dumping cancer into a lake and then asked them, ferociously, what font they preferred to be sued in.

Plus, “all things take time in government,” says Administrator Harvey, who recently resigned, apparently to pursue a career as a fortune cookie. But no matter. The signs are done now, and I doubt they’ll ever need to be updated: Vegas is a sleepy town, and the dollar is a stable currency.

Unfortunately, the commission’s years of effort proved as pointless as blue celery. Only seven percent of people read the BAPS, and cabbies proved unintimidated by Elmer’s Glue. And so, as my cabbie and I explored the Alamo, I dug into another creative solution.

Three-dimensional solutions clearly weren’t cutting it. As the kids would say: Nevada had to “go cyber.”

I need to warn you—I’m a Stanford-educated computer scientist, but you probably won’t be able to follow this.

Here is what Nevada did: Nevada created a real big Excel spreadsheet of real bad cab drivers. Then Nevada uploaded the spreadsheet to its website. 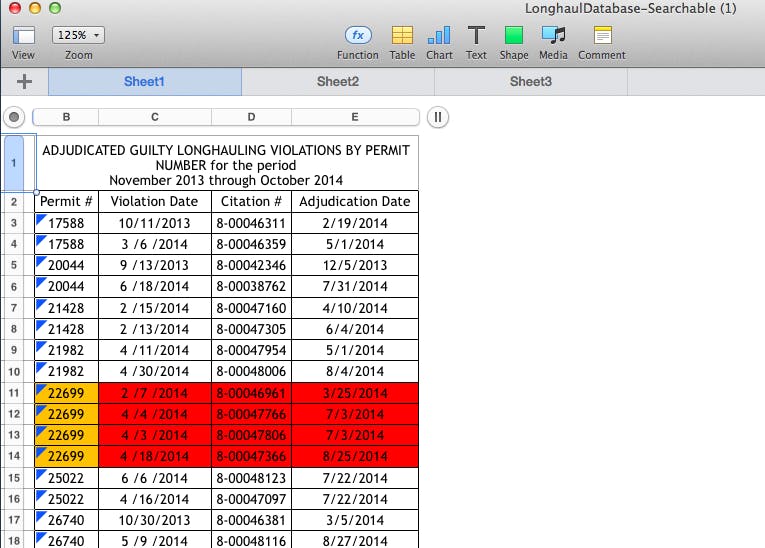 It’s like something out of an Isaac Asimov novel

“This database is provided as a resource to assist taxi companies when evaluating potential new hires to support their goals of employing a workforce in an industry truly dedicated to the public through honesty and integrity,” says the Taxicab Authority.

The Taxicab Authority also has a loose tooth that it has placed under its pillow to cover next year’s operating budget.

But unbelievably, the spreadsheet didn’t do the trick either; longhauling was worse than ever! While Mickey drove us through Three Mile Island toward my hotel, I read about Nevada’s nuclear option.

Government has never met a problem that it could not solve with PDF.

Nevada used this formidable, end-of-days technology to fashion its own version of Uber’s rating system. As you might recall, giving feedback on Uber is a veritable labyrinth of steps:

But Nevada’s system is as easy as 1–2–3, with no conditions on limb wetness:

Given that, here are a few insider “tips and tricks” to keep in mind when cabbing in Vegas: 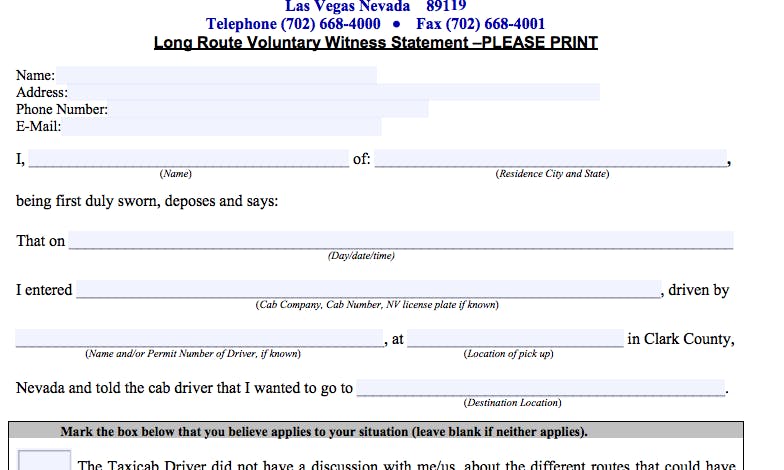 Reporting a scam in Nevada is simple. Just print, notarize, and fax.

I tried out the government’s system when I was in Vegas, but I never heard back from anyone. This is no doubt due to the shameful unreliability of the U.S. Postal System.

Whatever the cause, Nevada’s Long Route Voluntary Witness Statement affidavit has failed to curb longhauls. And so, whizzing through the iridescent cornfields of sunny Nebraska, I unpacked the final scheme.

Plan E: The Custom-Built Hardware That Does One Very Niche Thing That Your Phone Already Does On Its Lunch Break

Some challenges cannot be met by man or software alone. A long taxi route is one of those problems. Suborbital flight is another. Bytes and sweats can take us far, but for the world’s hardest problems, new circuitry must be laid, new metals fused.

The Nevada Taxicab Authority voted on Tuesday to convene a committee among industry members to draw up guidelines on how to conduct a pilot test of RideIntegrity, a software and hardware package designed to let the authority track cab movements and trip details online.

A journey of a thousand miles begins with a single commission voting to convene a committee to draw up guidelines.

Nevada estimates that it will cost approximately $6 million per year to install, operate and oversee these new “RideIntegrity” machines inside every cab in the city. You’ll pay for all this through an increase in your taxi fares (which are already double the price of an UberX ride, but, in fairness, less than half of the cost of owning a Gulfstream).

Bracing for the Long Haul

I am blown away by the admirable tenacity of the Nevadan government. The complaint Word doc; the bad driver Excel spreadsheet; the Powerpoint airport sign—when it comes to Microsoft Office 2003, Nevada has tried it all. Now all the chips are riding on RideIntegrity™. Will this be the one?

Vegas aficionados should band together and deliver an ultimatum to their government: $100 million and 100 years. But no more! If the Taxicab Authority can’t cure longhauling by then, residents should hand the reins to the TSA to implement sensible reforms like a Federal Cab Marshal Service.

Nevadans deserve light at the end of this tunnel, and it’s certainly not going to come from Uber’s dance with the ★★★★★’s.