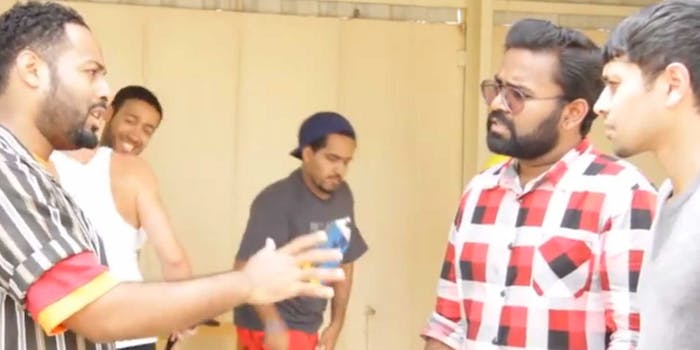 Some people have no sense of humor.

Earlier this month, the Daily Dot reported on the alarming case of Shezanne Cassim, a U.S. national living in Dubai who, along with two Indian and three Emirati accomplices, was on trial for violating the UAE’s stringent new cybercrime policy with a YouTube video uploaded before said regulations were in place. The 20-minute mockumentary, “Ultimate Combat System: The Deadly Satwa Gs,” lampooned the local youth for aspiring to the lifestyle of hip-hop gangsters.

Detained since April, Cassim has since been sentenced to a year in prison by an Abu Dhabi court and fined 10,000 dirhams ($2,723)—though he could have been on the hook for 1 million. The Indian codefendants who appeared in the short film received the same punishment, as did another American man, a British woman, and a Canadian woman, all convicted in absentia. Meanwhile, two Emirati defendants got eight months, and the other was pardoned. It’s not clear if time served will count toward the fulfillment of these sentences.

The offending video is still available on YouTube, though we don’t recommend watching it if you live in the UAE, where policing of the Internet has grown more repressive of late. The recently enacted cybercrime laws are theoretically intended to give the state more leeway in defending itself from security threats and terrorism, but government is using them to go after comedians and dissenting activists for what at very worst might be called defamatory remarks about the country—transmitted by social media. (Cassim’s video opens with a disclaimer that labels the work “fiction” and apologizes in advance to the people it pokes fun at.)

But judge for yourself: is the material below “liable to endanger state security and its higher interests or infringe on public order,” as Article 28 of the November 2012 decree has it? Suppose the nice thing about phrases like that is they can be twisted to suit any purpose, and to control any form of personal expression.