Prepare for an onslaught of pithy videos inside your Twitter feed.

Twitter-owned Vine released an app Thursday for creating and sharing short videos with sound. The kicker is that you’re constrained, much like the 140-character limit on Twitter, to six-second videos (apparently called “vines”). That forced brevity will foster creativity, according to the Twitter company line.

Naturally, vines are displayed in expanded tweets (also known as Twitter Cards) right off the bat. One shared by Twitter CEO Dick Costolo shows the slimmed-down process of making a steak tartare: 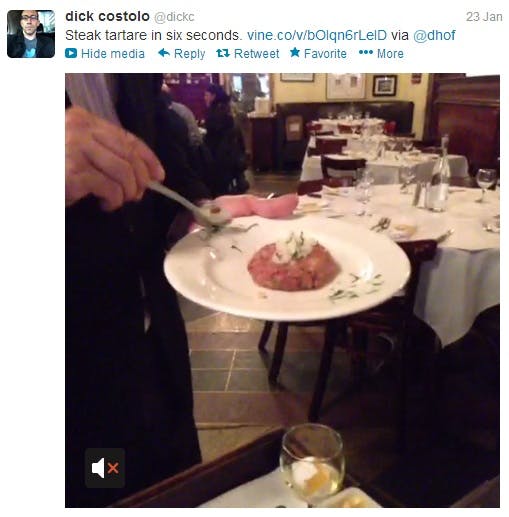 While the videos start automatically on a Web page, thankfully the sound doesn’t kick in right away. An announcement on the Vine blog notes you don’t need to use your Twitter account to register with Vine, but doing so will make the process faster and enable you to find your friends more quickly.

The rudimentary editing feature, whereby you create your vines based on how long you hold your finger on the screen for each clip, seems a neat touch. Who needs iMovie anymore?

Meanwhile, after the mess of Instagram’s Terms of Service change and a recent copyright case regarding tweeted photos, make sure to read those Terms of Service. Curiously, Vine doesn’t appear to ban sexually explicit content, although the ToS does make it clear your vines can show up in tweets.

There are a number of competing services which might be a little concerned with Vine and its heavyweight backing. Tout offers 15-second looping videos, somewhat reminiscent of Cinemagram (albeit with sound and without the option to animate isolated parts of the video/vine). A service which limited users to 12-second videos, the aptly-named 12seconds.tv, crashed and burned in 2010.

Perhaps most importantly, what of vine’s impact on the humble GIF? The animated file format has been around more than a quarter-century now, and while the power of sharing short animated clips or pieces of art through GIFs is endlessly compelling, it might just fall by the wayside if Vine takes off. The new service has the added impact of sound and, crucially, the distribution model of Twitter (GIFs don’t appear in expanded tweets, and Twitter has even cracked down on GIF avatars).

Vine, for all its slick sheen, has a couple of drawbacks. There’s no option to grab video you’ve already shot and use that in a vine. Also, it’s only for iPhone and iPod Touch for now (please don’t ever create them with an iPad, you’ll just look silly).

It’s too early to say whether Vine is the future of the GIF or anything else, yet there’s one trump card GIF has over Vine at this stage: It’s unlikely that a type of plant will become America’s Word of the Year for 2013.