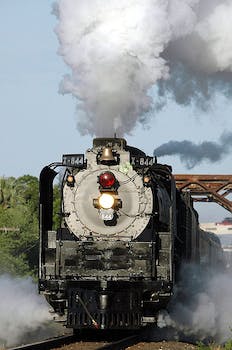 It used to be that if you wanted to follow a train, you had to actually do it in the physical world. Not any more.

It’s 114 feet long, weighs more than 450 tons, and when it was built—at the height of World War II—it was one of the most modern pieces of machinery in the world. Sleek, fast, and powerful are just a few words that could be used to describe Union Pacific Steam Locomotive No. 844.

Those same superlatives could be used to describe the many tools of the Internet age. One of those tools, Twitter, is now being used to track that old piece of industrial machinery. The Union Pacific Railroad uses Twitter to keep fans and followers updated on the location of one of its rolling “ambassadors.”

Although steam locomotives were once common on America’s railroads, they were deemed obsolete by the 1950s. Most of the engines were scrapped or hauled to museums. Most—but not No. 844. The Union Pacific saved that one and has used it ever since as the ultimate public relations tool. Since 1960, the engine has logged thousands of miles touring the UP system throughout the western United States.

Throughout the engine’s career as a rolling ambassador, it has gained appreciation from legions of train fans and history buffs. But until Twitter, they didn’t have a quick easy way to communicate and follow the train live, without actually being there.

UP’s corporate relations established the @UP_Steam Twitter account three years ago. It’s coordinated with a GPS device located in a train car behind the engine. As the train moves, the GPS automatically updates both the Twitter account and a map on the UP website.

Currently the engine is on a 32-day, nine-state tour through the Southwest and will be on the road until Nov. 29 when it will return to its home base in Cheyenne, Wyo.

The 844 is one of just a handful of steam locomotives of its size still in operation in the United States. It’s not the only one that can be tracked online. Nickel Plate Road No. 765, based in Fort Wayne, Ind., Southern Pacific No. 4449, based in Portland, Ore., and Santa Fe No. 3751, based in Los Angeles, Calif., are three other steam engines on Twitter. Unlike the 844, the other three engines are maintained by historical groups.