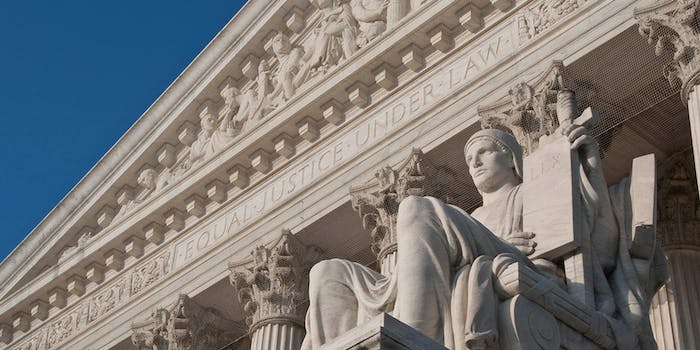 If you’ve ever taken a civics class, you know that when it comes to the American legal system, the Supreme Court always has the final word. But sometimes, that word isn’t so final.

As the New York Times pointed out last month, it’s not all that unusual for the court to go back and revise its opinion after a ruling is made. These changes can come months or even years after a decision was first rendered, with little to no publicization. And it’s not just innocuous typos and errors that get revised. As Harvard law professor Richard J. Lazarus told the times, these revisions can include “truly substantive changes in factual statements and legal reasoning.”

In the past, this has been a problem for lawyers, journalists and others who depend on the court’s interpretations of the law. With no way to know if an opinion has changed without doing a meticulous, manual comparison, it’s been easy to overlook changes.

But now there’s a new Twitter account that tracks and publicizes any changes made by the court, bringing a whole new level of transparency to the process.

In response to the Times article, David Zvenyach, a general counsel to the Council of the District of Columbia and a part-time coder, wanted to come up with a way to easily track changes made by the court after the fact. His solution was to come up with a relatively simple JavaScript application which crawls Supreme Court “slip” opinions every five minutes looking for changes. It then notifies an automated Twitter account which sends out an alert. Shortly thereafter, Zvenyach sends out a manual tweet highlighting the specific change.

The Twitter account, @Scotus_servo, launched last week and has already attracted more than 1,200 followers and put out 17 tweets. On his Github page, Zvenyach outlined his reason for creating the watchdog account:

“WHEREAS, It is now well-documented that the Supreme Court of the United States makes changes to its opinions after the opinion is published; and

WHEREAS, Only ‘Four legal publishers are granted access to ‘change pages’ that show all revisions. Those documents are not made public, and the court refused to provide copies to The New York Times’; and

WHEREAS, git makes it easy to identify when changes have been made;

RESOLVED, I shall apply a cron job to at least identify when the actual PDF has changed so everyone can see which documents have changed.”

Though some, like Gigaom’s Jeff John Roberts, have questioned whether or not the court might try to prevent an application from crawling its rulings, Zvenyach is confident his Twitter account won’t run afoul of the court. He notes that all the decisions are publically available, his program merely makes it easier to spot the changes.

This is not the first Twitter account of its kind. Zvenyach said he was inspired by @FISACourt, which crawls the docket of the Foreign Intelligence Surveillance Court for important updates.