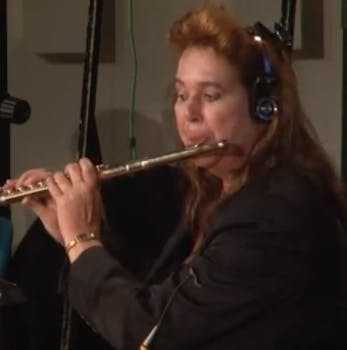 As part of a public awareness campaign, the Metropole Orchestra performed compositions submitted via Twitter.

On a regular Friday in the Netherlands, an orchestra played an extraordinary symphony— created entirely by Twitter users.

The Metropole Orchestra, which focuses on pop, jazz, and light music, asked Twitter users to compose a piece of music on the Tweetphony website and share it with their followers. The ones that made it into the event were then arranged and performed by the 52-member orchestra as part of an eight-hour concert.

The project was conceived as a way of raising awareness for the 66-year-old collective following a drop in funding. The concert was livestreamed, but for those who missed it, the orchestra uploaded some clips to the Tweetphony YouTube channel. Here are the best compositions uploaded so far:

A lulling, syncopated melody gradually builds before the brass kicks in. This one was submitted by jazz musician and record company owner Peter Erskine.

With a dancing sax line, wandering bass, and punchy drums, there’s nothing to dislike here.

Marius Regteren’s submission was turned into a funk-filled groove by the orchestra, akin to a track from a ‘70s road trip movie.

The Usdan Center for the Creative and Performing Arts got in on the act, offering a composition that was delivered with bombast and splendor.

This kicks off with a quiet xylophone beat that swells when the orchestra jumps in. It was based on a composition by Mike Underwood, a London-based multi-instrumentalist.