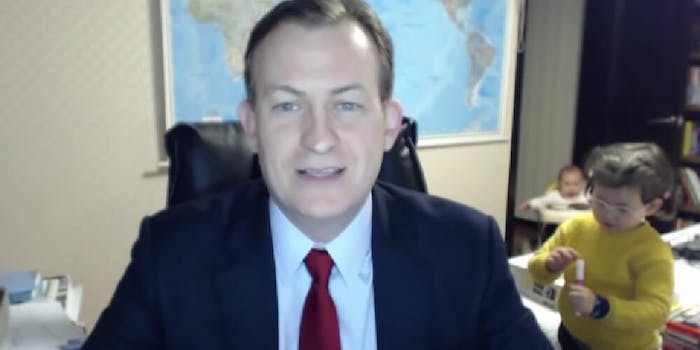 The professor was interviewed again. Sadly, this time without his kids.

In 2017, Professor Robert Kelly gave one of the most memorable interviews of the year. Not necessarily because of the topics discussed, but because his two adorable kids walked in in the middle of his interview with the BBC, completely oblivious to the fact they were interrupting their father on live television.

The video went viral, and viewers couldn’t get enough. First, the older kid marches in and walks right up to her dad, who is in the middle of an interview with the BBC about foreign relations with North Korea. The youngest walks in right after, quickly followed by their mother trying to corral the children out of the room, nearly falling over in the process.

Though Kelly’s wife does manage to wrangle the children out of the room, the door was left open, and you can see her reach back in, close to the ground, hoping to remain out of the shot, to close the door.

Now, two years later, Sky News posted an interview with Kelly about South Korea and the coronavirus outbreak, but all the internet can wonder is “where are the children?”

Viewers intensely watched the door, waiting for a cameo from Kelly’s children.

When none came, it was dubbed “the most hated locked door in all human history.”

Despite the disappointment when Kelly’s children didn’t make an appearance, some Twitter users said they respected Kelly for conducting an interview in the same exact spot, even calling it a “power move.”

Though fans of his kids are disappointed, it seems that Kelly has figured out how to properly lock his children out during interviews, which makes for smoother, though arguably less entertaining, interviews.