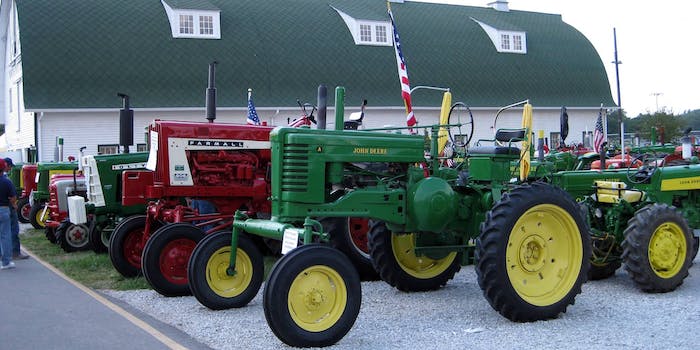 The unexpected realness of the #TractorSelfie hashtag

They're cropping up everywhere.

Let’s talk about selfies. If you’ve been hiding under a Mennonite rock and shunning cameras since the advent of smartphones, here’s a primer: A selfie is a just a picture of yourself that you took. There is literally nothing innovative to it, other than the fact that you’re not stuck waiting hours on end for the damn thing to develop.

The first self-portrait made by camera dropped in 1839. Sure, our technology has improved this process by leaps and bounds—think of the glorified monopod known as the selfie stick and basically any camera that’s not spewing dank tintypes—but there’s really not a whole lot that’s changed the game, you know? Even Kim Kardashian‘s selfie coffee table book felt about as ephemeral as a Snapchat.

It seemed as if nothing could disrupt the world of selfies, not even an Internet-breaking celebrity. That is, until the #tractorselfie was unearthed.

guise. #tractorselfie is a hashtag with results. The world is a wonderful place #🚜📸 https://t.co/p1vVxC9PqS

Some are calling bull on this false advertisement of a hashtag. Where is the anthropomorphic, self-photographing, heavy-duty farming equipment? Is this world really that much of a sham?

@kenyatta and yet not one of them is a selfie really because TRACTORS DON'T HAVE HANDS or cameras. Not sure why I thought that needed caps..

To that, I say: Hold your horses or some other farm equivalent.

If you do a bit of digging, (backhoe-ing?) there are riches to be unearthed in the #tractorselfie. Oh, and there are personified tractors.