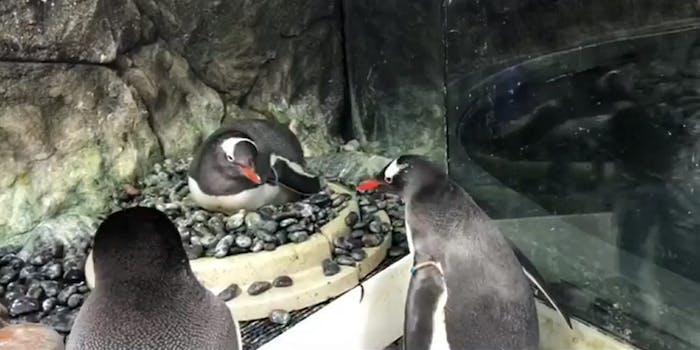 Sydney Sea Life Aquarium’s first gay penguin couple is on their way to becoming parents and the duo’s egg-rearing saga is taking over Twitter.

Gay penguins Sphen and Magic, or “Sphengic” if you will, are a staple at the Sydney aquarium as the resident gay penguin couple. Granted, the two penguins aren’t capable of reproducing on their own, but that didn’t stop the two from grabbing ice pebbles and creating a nest for an egg.

At first, aquarium staff gave Magic and Sphen a fake egg to take care of so they could learn how to incubate together during this year’s breeding season. But the two gay penguins were so good at egg-rearing that staff decided to give them a real egg from a straight penguin duo who had an extra one to spare. That’s right, Sphen and Magic are on their way to becoming parents.

Oh, and don’t worry: Sphen and Magic are already performing their egg duties quite well. In fact, the two are so skilled at their jobs that there are days at a time where visitors can’t even see their egg, which news.com.au calls “good for penguin breeding.”

It didn’t take long for the news to hit Twitter and take over the site.

Sydney's Sea Life aquarium says it is a gay penguin couple, Sphen and Magic, and they are hatching an egg together

Penguins giving each other special rocks is my favourite thing in nature, it's honestly just so pure and good

gay penguins hatching an egg together… life is good

GAY PENGUINS IS ALL IVE EVER NEEDED IN LIFE

I have an essay due in 12 hours but I’m on here reading about gay penguins sharing rocks to profess their love to one another pic.twitter.com/6aazuuLKTs

Everyone is falling in love with the gay penguin parents, despite the fact that their name is kind of weird.

On the other hand, Twitter fears the gay penguins will become the next battlefield in the West’s ever-looming culture wars.

I give it 12 hours until one of them is milkshake ducked.

Turns out they were right.

Gay penguins? These people will artificially make these penguins believe they're gay just to push this motion.
Smh

Lol someone blocked me over gay penguins and me explaining to them how the zookeepers knew they were gay penguins…..
BECAUSE THEY SAW THE PENGUINS FUCK

there was a Parks and Rec episode about this

ok but it’s homophobic not to acknowledge that will & grace did it first!!