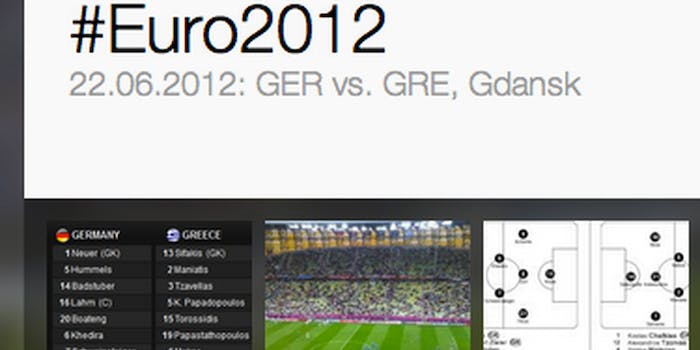 After the success of its page dedicated to NASCAR, Twitter is trying for another hit with the European Football Championships.

After revving up with NASCAR for a special sports section, Twitter now hopes to score with a similar page for the European Football Championship.

The sleekly designed page, which is based around the #Euro2012 hashtag, compiles selected tweets, must-follow soccer players, and recently tweeted pictures about the ongoing soccer championship. The page debuted Friday, which is a curious time to launch it since the games are already in the quarterfinal rounds.

Twitter said the page is meant to bring “fans closer to this conversation as it unfolds during the final stages,” according to a press release. It also explained the selected tweets will come from broadcasters, journalists, players and fans. We noticed the tweets are obviously from European-based sports organizations and players—all in English.

Since there have been more than two million tweets recorded using the hashtag #Euro2012, this page is a nice way to keep track of the action.

The selected tweets are smart but repetitive, with a lot of tweets from BBC Sport, Sky Sports, FIFA.com and a few players, but not much else. Also, the picture gallery on top could be refreshed more often. But as the games roll on, we’re sure Twitter will add some variety to the page.

If the #Euro2012 page proves to be a favorite of fans, we wonder what could be next. Wimbledon, anyone?