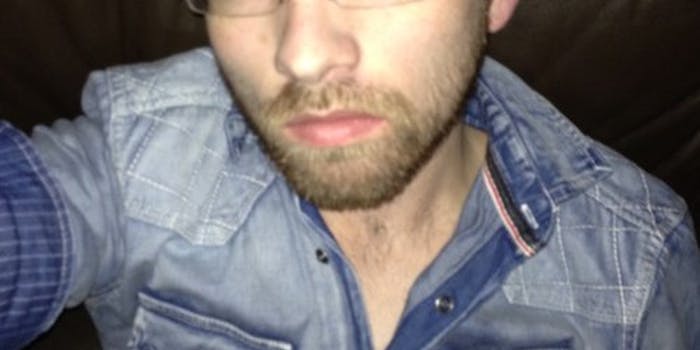 If you want better health care, don’t call your doctor a tw*t on Twitter

A man was kicked off his doctor's patient list after lashing out at hospital staff on Twitter. Was his right to free speech violated?

A man was kicked off his doctor’s patient list after lashing out at hospital staff on Twitter.

Mathew Cochrane was removed from the list at a surgery in Penarth, near Cardiff, Wales, over the following tweet.

His Friday tweet led to a letter from the office telling him to find another doctor: 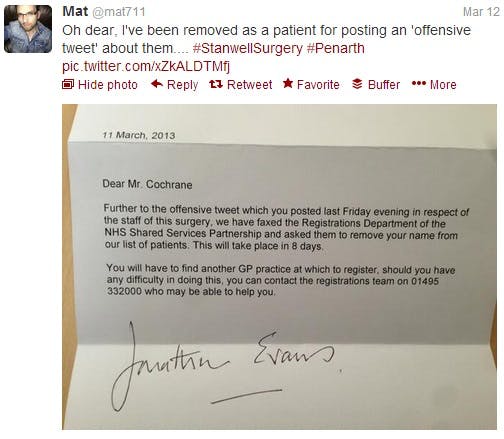 Cochrane, who suffers from cystic fibrosis, had contacted the practice to make an appointment. He was worried there was a serious problem, given that he normally only deals with a specialist consultant, though the receptionist told him the next available appointment was three weeks off.

He claimed he argued with the receptionist about the procedures and was told curtly that he needed to make his complaint in writing. To an extent, he did.

“The tweet was certainly in the heat of moment and in no way did I suspect it would see me struck off as a patient,” he told the Telegraph. He added that he didn’t receive a warning before getting the letter.

Cochrane, 26, later tweeted a link to the Parliamentary and Health Service Ombudsman’s page on unfair removal from patient lists. It states that National Health Service “contracts require [General Practitioners] to give patients a warning before they remove them, except where this would pose a risk to health or safety or where it would be unreasonable or impractical to do so.” It also points out the British Medical Association’s guidelines noting patients should not be taken off a list for making a complaint.

Granted, it could be argued that Cochrane’s tweet was more an attack than a complaint, though he claims that he did not receive a warning from the practice before getting the letter.

More troubling is that Cochrane, a driving instructor, does not use his full name on his Twitter account. The practice was still able to link his tweet to his confidential medical records and true identity.

“They made no inquiry to verify I am the same person as the tweeter,” he said.

The health board covering the practice told Cochrane that while practices are independent businesses, they are beholden to rules on delisting patients.

The question of whether Cochrane’s freedom of expression was violated is muddied by U.K. laws governing “offensive” communications.

Thousands of Twitter and Facebook users have been arrested over the last few years under the Communications Act 2003. Under section 127 of the Act, it is illegal to send via “a public electronic communications network a message or other matter that is grossly offensive or of an indecent, obscene or menacing character.”

Many of us can empathize with Cochrane, frustrated after dealing with an unhelpful person on the other end of the phone. The issues of privacy and lack of warning raised by this incident might have a broader impact than the tweet itself.