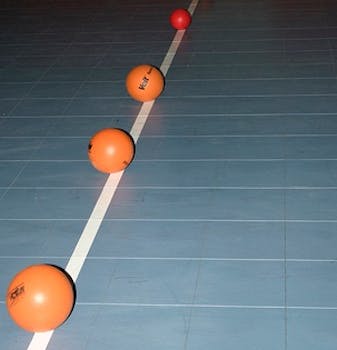 Your tweets control the rules of this charity dodgeball game

Students at Mohawk College, in Hamilton, Ontario, are holding a charity dodgeball game this Saturday, and your tweets can change the rules on the fly.

Twitter has changed the physical world in many ways as community members made their voices heard. It’s been used to light up harbors, feed dogs, and choose the color of the London Eye at last year’s Olympic Games.

Now it’s being used to change the rules of dodgeball, at least at a charity event.

Students at Mohawk College, in Hamilton, Ontario, are holding a Twitter Dodgeball Championship this Saturday to raise money for Special Olympics Hamilton. The local Special Olympics does not get funding since it’s a municipal organization, one of the dodgeball organizers told CBC. Special Olympics Canada exists to “enrich the lives of individuals with an intellectual disability through their involvement in sport.”

It’s fitting then that Mohawk students turned to a physical activity to raise cash. Only the audience will have a say in the battle through tweeting from their phones.

“Any spectators who come to watch it, they’ll be able to upload tweets and hashtag them,” said advertising student Lindsay Celeste, one of three event organizers. “And if they decide that they want to throw a few extra balls in the court, they can do that. Or if they want another team to join the game, they can join the game. So basically the audience has a say in what goes on in the actual game.”

Fans will also have the option to return an eliminated player to the court. Celeste and her teammates are hoping the event takes off and future students will continue the idea in later years.

Perhaps other sporting events could open up their rulebooks to the Twitter masses. Maybe fans can give coaches advice straight to a tablet rather than screaming it from the bleachers. Perhaps they can alter the height of the hoops during a basketball game. The possibilities for true fan interaction might eventually be only limited by physics, budget, and imagination.

Twitter voting can certainly make games more exciting, breaking rules and creating new ones on the fly. It’ll probably be a lot more fun for fans than athletes however.