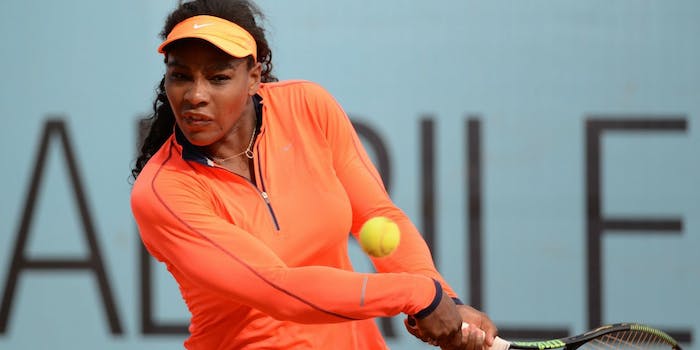 Roberta Vinci on Friday pulled one of the biggest sports upsets in recent memory when she handed Serena Williams a 2-6, 6-4, 6-4 loss in the semifinals of the U.S. Open. The upset nixed Williams’ attempt to win tennis’ first Grand Slam honor since 1988.

How big of a long shot was Vinci’s victory?

And when that big of a favorite gets beaten, the only logical explanation is that something in the player’s immediate atmosphere must have been so repulsive, so abhorrent, so utterly toxic that the only response was for that player to lose all control of his or her talent.

On that note, Williams reportedly is dating rapper Drake, who seems to curse just about every team for which he cheers. And you know who was in New York to watch his girlfriend, don’t you? And you know who the Twitter universe immediately blamed for Williams’ defeat, right?

It all started innocently enough. Even though Williams was likely disappointed she was pushed by Vinci to a third set, she started that final set by winning the first two games. And then Drake did this.

And from there, the match went to hell.

Much like the Grim Reaper, wishing Drake on other fan bases means he's showing up at your party.

Actually. This is Meek Mill's fault. He facilitated all of Drake's hubris this summer.

Serena is a legend. Iconic. Unmatched in athletic dominance.

So obviously this is Drake's fault. He's from Canada.

If Drake bet every horse in a race, I'm guessing an elephant would somehow prevail.

But there was one piece of good news for Drake.

Well when Serena breaks it off with Drake I'm here for you boo. My season is already in the crapper so no one will blame you.