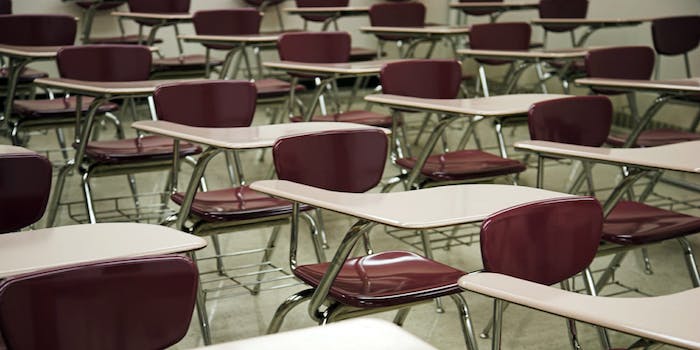 Viral Twitter thread reminds us that middle school was weird

Apparently, there's a lot of stories about bombs.

Think back to your middle school days for a second. If you were like me, you squirmed through confrontational abstinence-only sex ed classes, played Team Fortress 2 religiously, and spent an embarrassingly long amount of time on 4chan.

Clearly, other Americans had much more exciting middle school years. One Twitter user’s thread on “the most fucked up thing that happened to you in middle school” has spiraled into stories about diarrhea, spoiled milk, bomb threats, bomb squads, bomb scares, and a kid that “built a battery bomb on our bus.”

In fact, a lot of these stories are about bombs. Millennials, man.

The thread comes from Twitter user @lukasbattle, a popular New York-based Instagram and Twitter personality. Over on Twitter, @lukasbattle asked for users’ bizarre stories, and the original post has since earned over 4,000 retweets, 70,000 likes, and over 1,000 replies. For the record, he shared his own story, and it has to do with a bomb.

“Mine was when we were tossing a ball around on the bus saying it was going to ‘explode’ and the bus driver heard, called the police, and the bomb squad quarantined us in the bus for three hours ’till the dogs got done searching,” @lukasbattle tweeted.

Whats the most fcked up thing that happened to u in middle school?Mine was when we were tossing a ball around on the bus saying it was going to"explode" & the bus driver heard,called the police &the bomb squad quarantined us in the bus for 3 hours till the dogs got done searching

Another user had a similar story.

In fact, one Twitter user claims bank robbers called in fake bomb threats to every school in town so they could rob a bank while police were dispatched.

Bombs aren’t the only explosives in middle school. One Twitter user, @mauraleebee, shared a story about students who tried to sneak laxatives into donuts.

“On the day before spring break, some kids brought in a dozen donuts stuffed with laxatives (copying a prank from Jackass or something),” @mauraleebee tweeted. “The health teacher had an allergic reaction and got hospitalized. The school went on lockdown for half the day. Luckily, I was home recovering from a sinus infection. I woke up and my mom pointed at the TV and went, ‘your school’s on the news.'”

Luckily, I was home recovering from a sinus infection. I woke up and my mom pointed at the tv and went, “your school’s on the news”

Then there’s the story about a boy who “shit his pants and his turd fell out on the gym floor” while running laps.

“We just had to run around it until the janitor came,” Twitter user @apals14 explained.

In middle school gym class we were running laps around the gym & a boy shit his pants & his turd fell out on the gym floor & we just had to run around it until the janitor came.

Another user, @KayPevey, shared a story about a student who really needed to go to the bathroom. After his teacher refused to let him go, that student “straight up peed in his seat and all over the floor just to spite her.” Glory days, baby.

His intelligence and strength amazes me

Not all of these tales are about bodily fluids and bombs, thankfully. One story talks about a fire drill gone wrong during art class.

“In art we were doing paper mache on our faces and when we were letting it dry we had a fire drill so we all went outside holding hands, blind,” @liv_mast tweeted, introducing the world to Bird Box 2.0.

In art we were doing paper mache on our faces and when we were letting it dry we had a fire drill so we all went outside holding hands, blind

Then there’s @hellcherub, who remembers one teacher who left up an incredibly not-safe-for-school eBay search on her computer for a full hour.

And who could forget the kids who kept milk in ceiling ties over Christmas break? Spoilers: It didn’t last.

Boys in my 8th grade class hid milk in those lifty ceiling tiles in our class over the Xmas break. After break we all watched when our teacher unlocked the door and started gagging. We had class in this small gym all day while our VP yelled at us

When the Daily Dot reached out to @lukasbattle, he compared the thread to an r/AskReddit post, stressing that he loves the subreddit’s “different perspectives and funny stories.” For the record, he didn’t expect the tweet to get such an enormous response, but he understands why it did: “middle school is insane.”

“I feel like everyone can think back to middle school and be like wtf that was so out of control,” @lukasbattle told the Daily Dot over DM. “I used to feel like that was just a feeling I had but clearly not based on the replies. It’s just a transition period for everyone and funny stuff happens because everyone is so unstable.”

For the record, his favorite story is the girl who admits she didn’t know how to spell “French fries.”

As for this reporter’s weird middle school story? I was just old enough to sit through the D.A.R.E. program, and the cop that came in to warn us about drugs joked about his ex-wife and the divorce. We were 12-years-old.