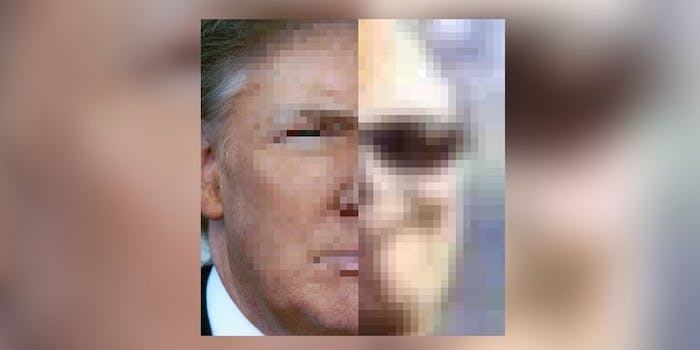 The results are better than you expect.

Given any kind of software toy, people on Twitter will find ways to abuse it and make it look ridiculous. The popular new website Tweet Mashup is no exception. It scans two Twitter accounts to produce weird, hybrid tweets that sound like neither or both of the parents. Inevitably, the most popular use for it seems to be mashing up various accounts with @realdonaldtrump.

melania and I do love to talk about Oach Lane pic.twitter.com/iiyShjkEBf

I am having way too much fun with this. https://t.co/eyLDzbM7CM pic.twitter.com/J0bM5X4ipn

the @dril / @freddiedeboer twitter mashup is truly the frankenstein with the darkest takes pic.twitter.com/kotrhoMTvc

https://t.co/M1DUvdXaJX … i think its broken though… it keeps flip-flopping on key issues pic.twitter.com/2bS6kKaoD5

the tweetmashup thing is perfect with dril and degg. pic.twitter.com/KKh5NQezBb

But the best play is to put the two of them together:

The best use of this tweetmashup thing is combining dril and trump tweets pic.twitter.com/pcqvVJodtd

It’s amazing how well this works. Would it be surprising for Dril or Trump to tweet any of these things? Not… really. In fact, New York magazine’s Select All pointed out back in May how unintentionally Dril-esque some of Trump’s tweets have been.

Tweet Mashup arrives just in time for this year’s Shit Account Tournament, a vote to determine the worst account on Twitter. Could some mutant combination of the terrible contenders actually be more annoying or offensive than the actual accounts? Guess we’ll find out on Dec. 1, when the Shit Account bracket is released.

Meanwhile, you can just use Tweet Mashup to slam together incongruous celebrities or make unlikely pairings of your friends. It’ll be hard to beat Donald Trump x Dril, but any two sufficiently mismatched personalities should give you a funny result.