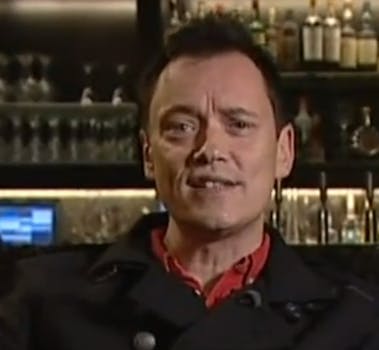 Terry Christian tweeted about an official at his 11-year-old son's soccer match.

A soccer player receiving a ban for arguing with a referee is one thing. A dad being told to stay away from youth games for tweeting about a ref’s apparent bias is quite another.

Terry Christian has been banned from his son’s games after a Twitter tirade against a referee. The U.K. broadcaster and TV host called the official “clumsy and blatantly and unashamedly biased” after his son’s team, Queensgate Juniors Wasps Under-11s, tied with Spurley Hey in a game in Greater Manchester, England.

Christian claimed his son was stamped in the groin and elbowed in the face, yet the other team was awarded a penalty after the ball hit a Queensgate player in the midriff.

“I put up one tweet after the game… and all of a sudden I get told the FA [Football Association] have said I should stay away from training and matches,” the Mirror reported Christian as saying. “I actually felt sorry for the ref because he was clearly put under pressure.”

Queensgate apologized to the referee for Christian’s assertions of bias and asked Christian to stay away from games and training sessions.

The 17-year-old referee in question issued a statement Thursday. According to the Manchester Evening News, he said:

“I understand that referees take a bit of stick from time to time, but basically I’m a 17-year-old lad who gives up his Saturday mornings to ref under-11s games and I’m gobsmacked by all this fuss.

Not all my decisions are popular but I always have the interests of fair-play, equality and respect at the heart of every call that I make.”

Christian, who has more than 36,000 followers, refused to take the referee’s statement at face value. He claimed the teenager’s father is the coach of the under-16s team at Spurley Hey, while his two brothers play for the Spurley Hey.

Photo of Terry Christian via BBC/YouTube