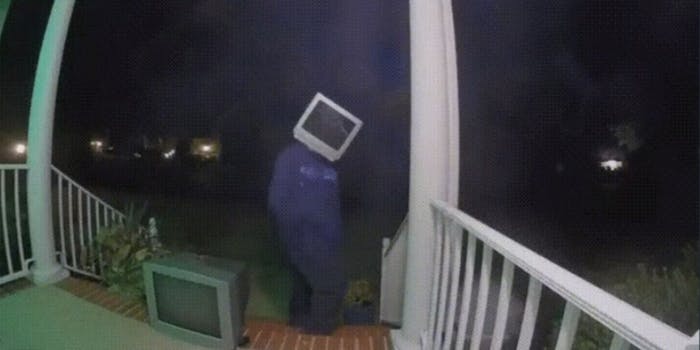 Don’t look a gift TV Head in the mouth.

Folks in a Virginia neighborhood awoke Sunday morning to old TVs on their front porches, and security footage of the mysterious gift-giver has spawned wild theories and memes.

Henrico County porches were gifted with approximately 50 vintage TV sets, each carefully positioned with its screen facing the front door. “It was very twilight zone,” said Jeanne Brooksbank, one of the giftees, to the Washington Post. “Everyone started coming out of their houses, walking around the neighborhood looking at the TVs there on the doorstep.”

Because it’s 2019 and we’ve apparently entered the surrealist phase of existence, the phenomenon got weirder. A doorbell camera showed the gift-giver was a person wearing boots, jumpsuit, gloves, and… a vintage TV set upon their shoulders. Stranger still, the camera showed the being—now known as “TV Head”—pausing after depositing one of the TVs on the porch, looking back with a head tip, and waving at the camera before walking away.

There are so many questions, so few answers, and so many memes. While the city reportedly collected the TVs to be recycled, the internet grappled with the infinite possibilities TV Head could represent.

My theory: It's the owner of a motel, he's replacing the tv's in the rooms and doesn't want to pay to recycle 50 old ones since they likely still work

Clearly murdered other TV people and showing off his trophies.

those are his eggs https://t.co/M1Q3mhUxKb

I firmly believe TV Head is well-meaning or at least benign. A Mothman type guy.

Comparisons were drawn to TV heads in media, including Cianti from the anime FLCL, Prince Robot from the Image comic series Saga, and The One Electronic from Evan Dahm’s webcomic Rice Boy.

You vs. the guy she tells you not to worry about pic.twitter.com/e2MWIG0yX7

However, there are some theories that have not yet been posited, such as:

But really, why question TV Head when you can embrace them? Folklore always comes from somewhere. (For example, the legend of Paul Bunyan might be based on French-Canadian logger Fabian Fournier, and neurologists have theorized that vampires appeared across cultures as an explanation for rabies.)

One can only begin to imagine what legend TV Head will become.