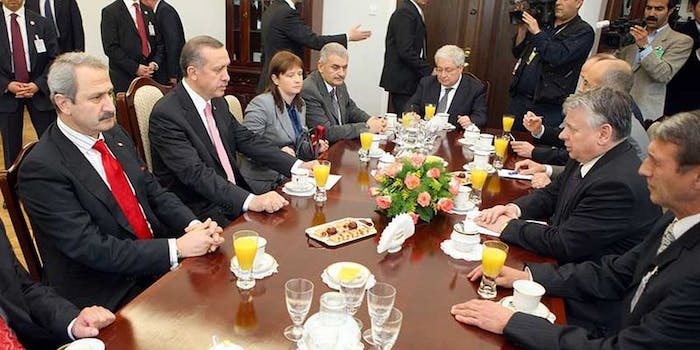 Minister of Transport and Communication Binali Yıldırım clarified early statements that social media could lead "Turkey in the wrong direction," and said Facebook and Twitter will not be banned.

Hold that tweet: the Turkish minister of Transport and Communication released a statement Tuesday that contrary to the impression he’d given on television, he would not consider suspending the country’s Twitter and Facebook service in times of strife.

Clearing up his intentions, Minister Binali Yıldırım announced Tuesday that contrary to earlier reports, censoring Turks’ social media use wouldn’t become an option for the government.

It was a necessary clarification: Arda Kutsal, founder of popular Turkish tech site Webrazzi, told the Daily Dot via email that “all of the press covered the story today in Turkey.”

“Yildirim just said ‘social media is a threat at times of terror because it provokes masses, and we need to take action about it’,” Kutsal added, though it’s unclear exactly what the Minister had meant by “action.”

Turkey had previously come under fire by the watchdog group Reporters Without Borders (RSF), who wrote in their annual “Enemies of the Internet” report that in early 2011, the government filtered the Blogger.com domain for two weeks.

RSF classified Turkey as a “Country Under Surveillance” this year because of its habit of blocking sites thought to sympathize with Kurdish separatists. In his original speech, Yıldırım specifically cited misreporting of violence between the Turkish government and the Kurdistan Workers’ Party (PKK) on social media as a major concern.

But Yıldırım tried to lay any censorship rumors to rest in his second statement, saying that “the implementation of censorship cannot in any way be in question.”

“Obviously it may still be true, you know politics,” Kutsal said. “But at the moment it is denied by both parties and the minister said it’s just a rumour.”

“In my opinion, it’s not possible at all,” he added.