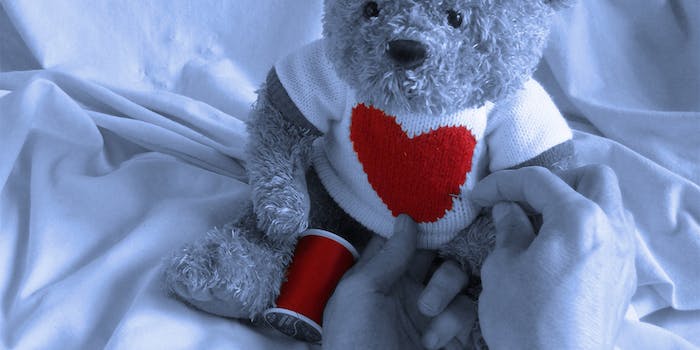 A tragic teen suicide can’t be blamed on Tumblr

With many high-profile cases of social media-related suicide, the lines between cause and symptom are often blurred.

In October 2012, the tragic death of British schoolgirl Tallulah Wilson became the latest in a string of social media-related suicides.

Unable to find support among her real-world peer group, Wilson had turned to Tumblr to express her feelings of self-loathing. When her mother found photos she’d posted of her self-harm scars, her blog was shut down. One day later, on Oct. 14, 2012, she took her own life by stepping onto the train tracks at St. Pancras Station in London.

Last week, an inquest into Wilson’s death brought the case to the attention of the British media once again. At 15-years-old, she was a talented ballet dancer who struggled with depression and eating disorders, eventually becoming obsessed with blogging about self-harm and suicide. In a statement to the press on Wednesday, her mother, Sarah Wilson, described Tallulah as being “in the clutches of a toxic digital world” and urged advertisers to withdraw from any website that included material that appeared to promote suicide or self-harm.

Could Tumblr really have done more to protect a vulnerable teen from dangerous influences online? Or does this sad instance illustrate the need to better educate parents about the places and interactions their kids experience online?

In February 2012, Tumblr announced that it would be altering its content policy to include rules that actively combated “the promotion or glorification of self-harm.” By the beginning of March, the policy was already in place. Pro-self-harm content is forbidden on the site, and when searching phrases such as “suicide,” “anorexia,” “thinspiration” or “self-harm,” users are now confronted with a pop-up message with links to counseling and prevention resources. Tumblr also provides an anonymous chat services, which younger users might feel more comfortable with using. Users who post inappropriate content face having their blogs deleted and their IP addresses blocked from using the site again.

Tumblr made its intentions clear in a followup post addressing users’ concerns:

“While we won’t allow blogs dedicated to triggering self-harm, we will not act against blogs engaged in discussion, support, encouragement, and documenting the experiences of those dealing with difficult conditions like anorexia, bulimia, and other forms of self-injury. We absolutely want Tumblr to be a place where people struggling with these behaviors can find solace, community, dialog, understanding, and hope.” 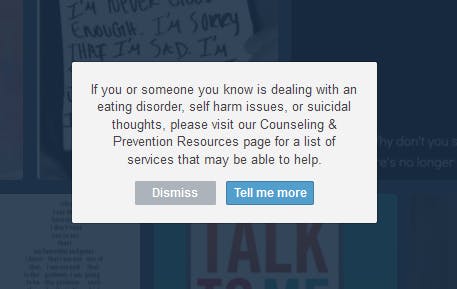 In response to the Tallulah Wilson inquest last week, a spokeswoman from Tumblr said that Wilson and her family were “in the thoughts of Tumblr and its employees.” She went on to highlight Tumblr’s understanding of the issue of self-harm and suicide-related content.

“Issues of depression and self-harm are extremely challenging, particularly in online environments that encourage self-expression. Tumblr has policies to address the most harmful of this content, and we have systems in place to direct users to appropriate resources for getting whatever help they may need. We are committed to continually improving our ability to act on self-harm content, and also to keeping Tumblr a positive, supportive environment for those individuals dealing with issues of depression and self-harm.”

In the British press, coverage of the Tallulah Wilson inquest was often accompanied by headlines mentioning “suicide blogs,” “online nightmares,” and Tumblr. But as in with most cases of teen suicide, there was no simple answer to the question of why such a talented and promising young girl would decide to take her own life. 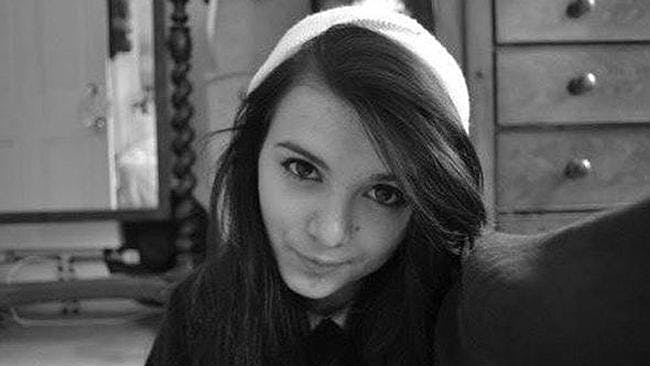 Four months before the death of Tallulah Wilson, the British media was focusing on a very similar case of teen suicide, that of Rosie Whitaker, a 15-year-old girl who walked onto the train tracks near her home in South-East London.

Like Wilson, Whitaker was a talented amateur ballet dancer who struggled with self-harm and body image issues, which led to her visiting “pro-ana” (pro-anorexia) sites where people would share advice on extreme weight loss techniques. Both girls attended the same dance school, the Place, and while they are not thought to have known each other, Sarah Wilson described her daughter as being “obsessed” with media coverage of Whitaker’s suicide.

Whitaker’s family blamed the influence of pro-ana websites and planned to launch a campaign to spread awareness of the issue, with her mother saying, “It appears [Rosie] was, unfortunately, heavily influenced by websites and online communities promoting self-harm and suicide. We hope her tragic death serves as a warning to other impressionable youngsters and their parents that such sites pose grave risks.” 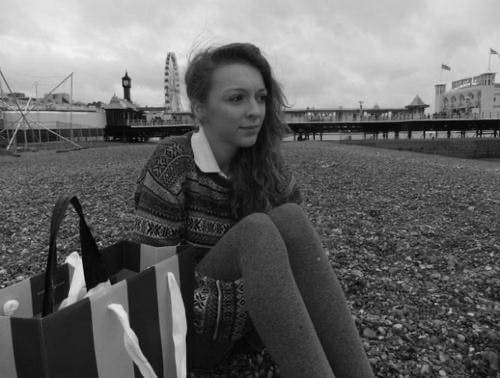 As with many high-profile cases of social media-related suicide, the lines between cause and symptom were blurred. Whitaker had already been treated for an eating disorder and had been struggling with mental illness for several months, often blogging about her thoughts of suicide and self-loathing. Similarly, Tallulah Wilson was assessed to be “severely depressed” when she met with a psychiatrist in May 2012.

The day before Tallulah took her own life, her mother discovered details of her activity on Tumblr, including photographs of her daughter self-harming. Tallulah had created a cocaine-using fantasy online persona as a kind of escapism, gaining thousands of followers, including some who her mother suspected were comparing their self-harm scars.

“She said she had 18,000 people who loved her for who she was online,” said Sarah Wilson. “She told me she was finally happy, she didn’t think she could have friends in the real world.”

Horrified by what her daughter had been posting, she shut down the Tumblr account, hoping to protect her daughter from the self-harm images she had seen online. The next day, Tallulah was driven to a dance class but did not attend and was later found to have jumped in front of a train at London’s St. Pancras station.

On Jan. 22, 2014,  the inquest into Tallulah Wilson’s death was closed, inspiring a new burst of media attention as tabloids began to post portraits of her posing with her guitar, coupled with headlines about the dangers of the Internet. Her mother’s heartbreaking press statements told the story of someone who was helpless in the face of a relative’s mental illness, trying and failing to get effective professional help as her daughter slipped away into “a world where the lines between fantasy and reality became blurred.” 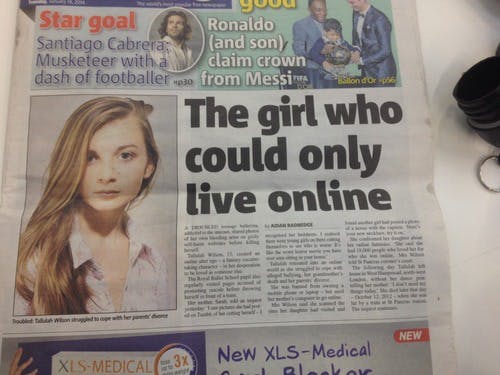 Sadly, it all feels very familiar: the media narrative of a teenager with their whole life ahead of them, driven to suicide by online influences. In 2013, social media site Ask.fm became notorious after seven teenagers committed suicide following reports of cyberbullying on the site. But while stories of cyberbullying and harassment usually have a clear villain on which to attach the blame, situations such as Tallulah Wilson’s highlight a more complex issue. In short, many teens feel that sites like Tumblr are the only place they can safely discuss their problems.

In the case of Tallulah Wilson and Rosie Whitaker, the media coverage seemed to focus on three things: their creative talent and promise as dancers, the obvious inaccuracy of their belief that they were fat or ugly, and their habit of frequenting self-harm blogs. In the rush to discuss the dangers of teen-friendly blogging services like Tumblr, the fact that both girls had recently been treated for serious mental illnesses was mentioned almost as an afterthought.

The problem is, the decision to ban vulnerable teens from social media puts parents between a rock and a hard place. While the dangers of pro-ana blogs and self-harm communities are clear, sometimes the lines are blurred between harmful content and real support groups that might actually help with a person’s recovery. After all, many teenagers turn to sites like Tumblr to find friends and emotional support because they feel isolated at school or at home.

There are thriving Tumblr support communities for transgender teens, those struggling with mental illness, and just about everything else you can imagine. Cutting teens off from their online life and such support circles might actually do more harm than good.

Tumblr blogger piratemoggy, who often writes about teen culture and mental illness, wrote a lengthy response to the media coverage surrounding the Tallulah Wilson inquest. In it, she speaks of her own issues with depression and eating disorders as a teenager and how being cut off from her blog would not have been the right solution.

“When I was younger, I was fairly heavily into doing a lot of ballet and not eating food… When I was at university, I discovered ‘thinspo’ communities on LiveJournal—groups of people exacerbating their conditions by staring longingly at emaciated bodies. It’s warped. It’s sick. It’s not the website’s fault. …

“What I needed, more than anything, was to get better. I didn’t need my LiveJournal shutting down, I definitely didn’t need cutting off from the only places where I talked about the condition, I needed access to services that would help me get better. I needed my mental illness to be taken seriously, even though I was a teenage girl.”

Tumblr understands the complexity of the issue. “We’re not under the illusion that it will be easy to draw the line between blogs that are intended to trigger self-harm and those that support sufferers and build community,” the company wrote in February 2012.

Indeed, the jury at the Tallulah Wilson inquest seemed to reinforce that thought, emphasizing the need to better understand an online culture that is often only accessed by teens.

“This case has highlighted the importance of online life for young people,” they said. “We all have a responsibility to gain better understanding of this. This is a particular challenge for healthcare professionals and educators.”

Instead of buying into the idea that every social media service is a hive of cyberbullying, harassment, and inappropriate content, parents and teenagers need to educate each other about how to stay safe online—and how to seek reputable help for mental illness. Sometimes online activity can help, and sometimes it can hurt. But demonizing social media is not going to solve the problem.