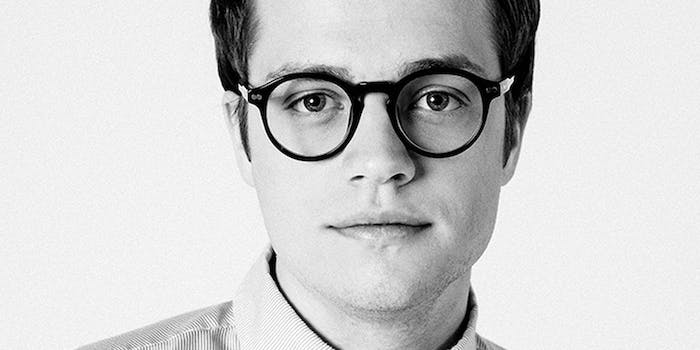 How a hotel security guard for America's Next Top Model helped design some of Tumblr's most important features.

It was the summer of 2007, and Peter Vidani sat in plush blue chair in the middle of a hotel hallway. Downtown Los Angeles was dead this particular evening. The only sounds to be heard were humming of the elevator, the occasional laugh from a room down the hall, and the gentle whir of a laptop he used to browse Tumblr—his latest obsession.

Vidani was on a security detail. He only had two responsibilities that night: to make sure the contestants of America’s Next Top Model never left the hotel and to escort them from their rooms down to the hotel restaurant for breakfast in the morning.

“They were just these pretty young girls; they were obviously having a blast,” Vidani told the Daily Dot. “Every once in awhile I would glance up to see if anyone was around. It was ridiculous. [The girls] could have easily left through the staircase in the back instead of taking the elevators.”

Now five years later, Vidani is a different sort of guardian. As Tumblr’s sixth employee, Vidani is the company’s guru of design, managing a team of five responsible for making the blog—from the small buttons on the dashboard to the entire iPhone application—look good.

“It’s never not exciting,” Vidani said. “Three years is not a long time, but in this industry, it is.”

As design director, Vidani splits most of his time between managing his team—four designers and a writer—and completing design work himself. Over the last two months, Vidani has helped three of Tumblr’s biggest initiatives: the Pinned Posts feature, which allows users to pin content for a small fee to the top of their followers’ dashboards; the interface used to customize your blog; and the site’s election special, a “Register to vote!” button that recently appeared on the dashboard.

Vidani grew up in Green Bay, Wis., where his parents own a large-scale print shop that does work for architects and local businesses. As a child Vidani would visit the shop to watch his parents work and play on the Apple computer they used to create the prints. (The most notable architecture order they ever received was for Lambeau Field blueprints.)

After high school Vidani enrolled at the University of Wisconsin-Milwaukee, where he took a part-time job as a busboy and waiter at a restaurant on campus. Vidani bounced between majors—film, graphics, and business—before dropping out after about three years in the spring of 2007.

Vidani decided to take that break in Long Beach, Calif., where he took almost any job he could find. That included a stint as a graphics designer for Blind Date, a talent agent for commercial actors, and a production assistant for America’s Next Top Model.

While babysitting the models in the downtown Los Angeles hotel from about 10pm to 8am, Vidani passed the time on him laptop, scrolling through Wikipedia and building his Tumblr blog, a place where he shares funny images, quotes and random musings. Vidani gravitated toward the network’s theme-making community, creating original layouts for users to upload to their blog. That’s how he befriended Jacob Bijani, a fellow imageboard lurker and early Tumblr user.

The two ended up creating Start.io, a customizable website for people to store their favorite links. In January 2008, Vidani moved home to enroll once again in college while Bijani wrapped up his final semester of art school. The two continued their friendship through Tumblr, where Bijani had captured the attention of founder David Karp.

“I made a weird side-scrolling theme for my blog, which made the rounds and eventually got David to follow me,” Bijani told the Daily Dot. “We emailed a bit and I started doing some freelance work making themes for VIPs on Tumblr. A months after I graduated college in San Diego, David happened to be in town for Webby Connect. We met up for the day, he offered me a job, and I moved to New York a few weeks later.”

Bijani worked out of the office Tumblr shared on Park Avenue with Fred Seibert’s Frederator Studios, the production company behind some of Nickelodeon’s most memorable cartoons. During this time Vidani was also building a reputation on Tumblr as a talented freelance theme designer who had done work for the likes of The Atlantic, The New Yorker and Newsweek. With Bijani’s recommendation, Vidani was hired in May 2009.

“It was a magical place,” Vidani said about the space on Park Avenue. “The office there was like a kids bedroom. It was littered with art. It was incredibly laid back.”

Today Tumblr has grown to accommodate more than 100 employees in a posh Union Square headquarters. The site collects more than 62 million posts a day. While much of the company has changed in the last three years, Tumblr still has that laid-back feeling Vindani loves.

“The work we’re doing at Tumblr, and the people I get to work with, excite me,” he said. “I wouldn’t want to be anywhere else.”