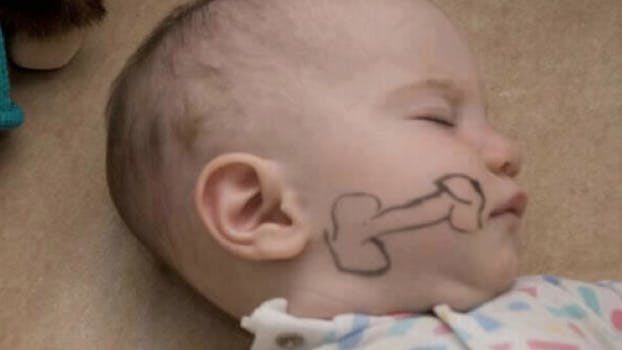 Tumblr couldn’t stop a blogger from posting this photo

And that line, it seems, is a penis on a baby’s face.

Death & Taxes magazine editor and Vice contributor Ned Hepburn didn’t expect to rattle any cages when he posted an innocent photo of a baby with a dick drawn on his face, but Tumblr’s Minitrue soon let him know they were not amused.

They promptly removed Hepburn’s photo and sent him a notice saying the site’s terms of service had been violated, and warning him that repeated violations will not be tolerated.

“Wow, good job Internet Police,” Hepburn retorted in a Tumblr post that included a screenshot of the digital memory hole.

He continued: “Way to get that picture of a baby with a dick drawn on its face deleted, Tumblr. Maybe next you’ll start policing the SEA OF PORNOGRAPHY also hosted on your servers? Fuck you.”

Hepburn wasn’t quite done challenging Tumblr’s Thought Police: Soon after he re-uploaded the offending photo to his Tumblblog.

So far, Tumblr has left the photo in place, suggesting that even when it comes to enforcing previously enforced terms of service, Tumblr has a double standard.