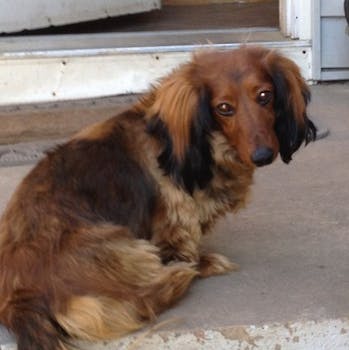 Andy is a 4-year-old dachsund with lymphoma and he could use your help.

A dachshund named Andy needs your help to raise money to help beat cancer, so his owners turned to Tumblr for support.

On Save Andy, owner Brian Foy is showcasing pictures of the four-year-old dog and providing updates as the dog battles canine lymphoma. The dog was diagnosed last week and is currently undergoing chemotherapy.

“We’re hoping we can have him treated and have him good as new in no time, but we can’t do it without other people’s help,” wrote Foy on the blog’s first entry. The blog links to a gofundme page to help offset the veterinarian’s bills. The goal is to raise $2,000, but only $330 has been raised so far.

Previous attempts at crowdsourced fundraising for sick pets have been met with minor success. There are currently about 200 pets seeking help on gofundme. A sick dog in Greece has nearly made its goal as did another dog in Texas fighting cancer.

As of Monday, the size of lump near Andy’s neck has decreased, so the treatment is working. “Andy’s family is truly touched that so many people have gone out of their way to do a little good,” the owners wrote.

But that good hasn’t transcended all Tumblr users and some have attacked the campaign, like user phire who wrote that the vet’s bills are the responsibility of the owners—not anyone else.

“Had it been a human, we might have cared a bit more. But no, it’s just someone’s mangy dog in a picture with someone’s pot belly hanging out. Am I going to donate? No.,” wrote phire.

Many Tumblr users lambasted those insensitive remarks, like skateboardkyle who remarked that phire should move along if he isn’t interested in donating. “It’s someone’s f—ing dog, who could use a little help,” he wrote.

A little help that could save a young dog’s life.