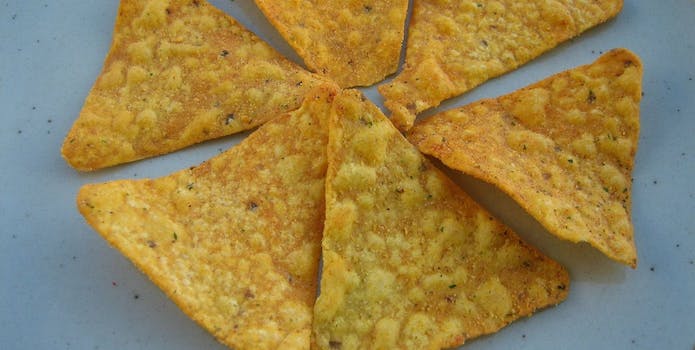 One of the greatest scenes of Mike Myers‘ film career was his extended  bit in Wayne’s World on the power of product placement in film. In case you haven’t seen it, stop everything immediately and watch:

But Wayne and Garth aren’t the only ones to subliminally advertise some of the most delicious snacks that have ever been produced. We speak, of course, of Doritos, the seasoned tortilla chip that will leave your fingers and lips a special shade of orange and give you the best case of Cool Ranch breath anybody within ten feet could hope to inhale.

And Doritos appear more often than you think in movies. Luckily, there’s a Tumblr account devoted to highlighting these instances. Appropriately, it’s titled Old Doritos Bags in Movies (And Sometimes on TV), and it’s wonderfully tasty.

While the site highlights movies featuring, among others, a 1980s Patrick Dempsey, a high school reunion for at least one Friends character, and a professional journalist who re-enrolls in high school, here are my three favorite examples. Seemingly none have anything to do with weed.

Anything with John Candy, Steve Martin, an epic road trip, and a mini-bag of Doritos is A-OK by me.

And the best damn TV show the world’s ever seen.

Make sure to check out the rest of the site. It’s a nostalgic trip back to last century—when the only thing we had to worry about was grabbing enough napkins to clean up all the Doritos dust that was left on the couch after we spent an hour with Brandon, Brenda, and the 90210 gang.